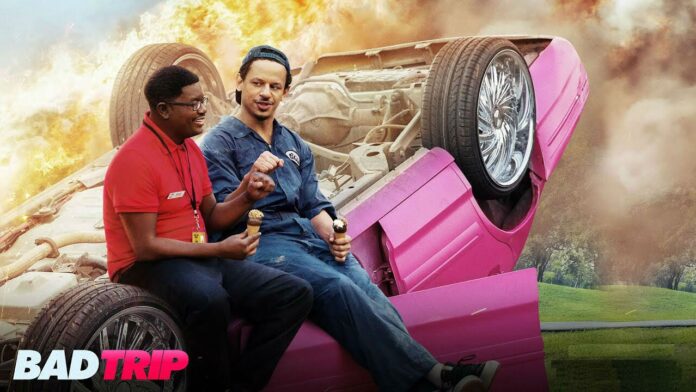 I’m late to the Eric Andre party and up until I screened his new film with Del “Lil Rel” Howery, Bad Trip, I was only aware of him as a popular meme template. Not to worry, I’ve added The Eric Andre Show to my queue after seeing this film. Bad Trip is a hybrid, mixing a buddy road trip comedy with a hidden camera prank show, ala Borat or Bad Grandpa (the latter being the inspiration for this film). The flick sees Chris Carey (Andre) and his best friend Bud (Howery) go on a road trip to NYC so Chris can re-capture the love of his high school sweetheart Maria (Michaela Conlin). Lacking in transportation the pair decide to “borrow” Bud’s sister, Trina’s (Tiffany Haddish) beloved car since she’s in prison and won’t find out. The two are faced with a ridiculous number of over-the top trials and tribulations on their way, the worst of which being Trina’s escape from prison, since that means she is now hunting them down for taking her car. 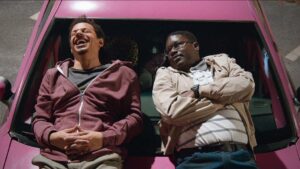 So let’s get this out of the way first, if you’re not a fan of low-brow comedy, if Jackass was never your thing…then Bad Trip isn’t for you. Everyone else, well you are in for a hilarious and surprisingly uplifting film. The storyline setting everything in motion is nothing special and obviously only exists as the vehicle to get to the next prank, though you can see the effort they put in to making everything cohesive. While we never really get invested in Chris’s quest they were able to merge the two that made the transition to a prank scene less jarring then what you usually end up with in films like these. Tiffany Haddish, of course, is great as the terrifying Trina and she REALLY gets into it when it comes time to interact with the unsuspecting public. I was surprised that she was able to be in a film like this as effectively as she was, you’d think more people would notice that the breakout star of Girls Trip had just broken out of prison right in front of them. 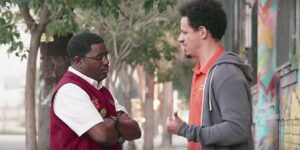 What really impressed me was the line that Andre walked with the pranks that were included. I’m always extremely wary of these types of films, more often than not they are seriously anxiety inducing and move more toward gross then funny by the end of the film. I get it, you need to one up the last prank or what’s the point, but the end result can be unwatchable for a lot of people. This isn’t to say they’re tame, any movie that includes a scene of a gorilla making sweet love to a man that snuck into his cage at the zoo is immediately removed from the “tame” category. Nope, not tame but varied, their seemed to have been a lot of thought put into the different ways to trick people. With films like Jackass you end up wondering just how many ways can you construct a prank centering around fireworks and an anus before you’re just repeating yourself. Bad Trip kept the pranks fresh and on different spectrums of the “offensive” chart throughout. 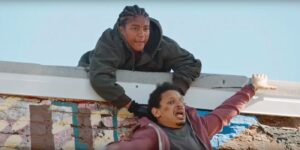 As I said before, this one’s pretty simple to review. If you like gross-out comedies and/or prank shows you will be more then satisfied with Bad Trip. I can’t finish this review without talking about the most surprising aspect of the film. It seems everywhere we look these days we’re being told how bad the world and people in general are. This is not what I expected to say, but truthfully speaking Bad Trip gave me back some hope for the future. Almost every single time a prank is executed you see good people emerge with concern and care (not the Chinese Penis Trap guy, he was an exception). Whether it’s a woman chastising Haddish for hanging Andre off the side of a building, or a caring Army recruiter Bad Trip ended up being a spotlight for the fact that, despite appearances, people are inherently good.