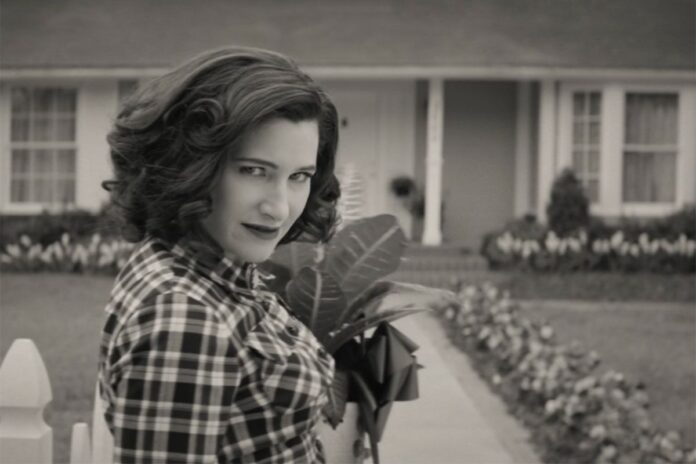 WandaVision may have gotten off to a slow start for me, but I’d be lying if I said the last few episodes haven’t been amazing. Truly, the explorations of Wanda’s grief over the deaths of Vision and her brother Pietro through the lens of classic TV sitcoms and superheroics has been extraordinary, and I think the most inventive thing Marvel has ever done. And that’s even with the show’s biggest reveal, so far, having been figured out long before the first episode ever aired.

In the seventh episode it was revealed that Kathryn Hahn’s character, Agnes, was really the witch Agatha Harkness, and the one behind all of this craziness from the start. We knew this. Literally, I think we figured this out from the moment Hahn was cast, and the series did little to obscure her role in all of it. I was the way it was revealed, by way of an incredible Munsters-esque jingle, written by Frozen duo Kristen Anderson-Lopez and Robert Lopez, that blew me and apparently everyone else away. And yes, that was actually Hahn singing those evil, witchy lines herself.  I can’t believe she did that to the poor dog!

Check out the jingle for yourself because it’s great.

It was her all along 🐇 The seventh episode of Marvel Studios' #WandaVision is now streaming on @DisneyPlus. pic.twitter.com/MkJif48YsN