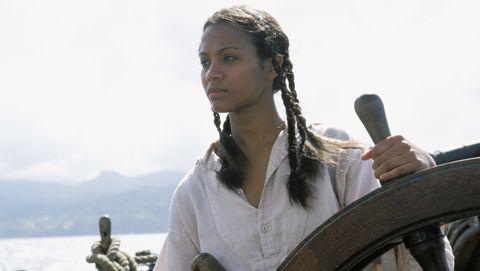 Back in 2003 before she hit the big time, Zoe Saldana had a small role as Anamaria in Pirates of the Caribbean: Curse of the Black Pearl. It didn’t lead to a recurring  role or anything, but it got her a foot in the door at Disney, a place she would call home for years as part of the Guardians of the Galaxy. Well, the pirate life is calling Saldana once again, but this time for a Netflix movie titled The Bluff.

Deadline reports Saldana will star in The Bluff, a film that Netflix won a hot bidding war to acquire. Set in the Cayman Islands of the 1800s, the story follows “Ercell, a Caribbean woman whose secret past is revealed when her island is invaded by vicious buccaneers.”

In what sounds like a potential Netflix franchise, the film is described as aiming “to blend visceral action and historical fiction to create a real action vehicle as the heroine fights against the atrocities committed by the pirates.” There are other key female roles, too, including that of the nasty villain pirate.

On board to produce are the Russo Brothers, who are obviously familiar with Saldana from their Marvel Studios time together.   The film will be directed and co-written by Caymanian filmmaker Frank E. Flowers. He’s probably best known for his short movie, Swallow, which became an acclaimed feature just last year, and the 2014 Orlando Bloom drama Haven, which was shot in the Cayman Islands.