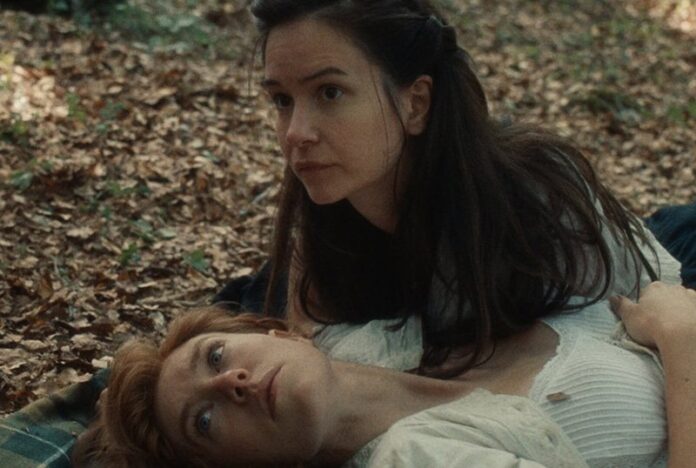 The second recent lesbian love story set in the 19th-century, Mona Fastvold’s rapturous The World to Come has only that in common with the droll, lifeless Ammonite.  Set in the frontier of the American northeast in the 1850s, harsh winters mirror the cold and callous life for women of the period. In particular, married women with a life mapped out to little more than work on the farm, work in the household, work in the bedroom. But as the chill lifts, what emerges is a passionate, sad romance about the consequences of finding your one true love at the wrong time.

January 1856. A hopeless journal entry by Abigail (Katherine Waterston) begins, “This morning, ice in our bedroom for the first time all winter. The water froze on the potatoes as soon as they were washed. With little pride, and less hope, we begin the new year.”

The frigid air in the marital room is nothing compared to the icy tension between Abigail and her husband, the aptly-named Dyer (Casey Affleck, somber as ever), who does little beyond manage their farm. They lost their daughter to diphtheria some time before, and the gap has widened between them ever since. Even with Dyer around, loneliness has crept into Abigail’s heart, a feeling she likens to “a library without books”, an almost unthinkable thing for her adventurous spirit and mind, which she sets free in journal entries because to voice her thoughts aloud would be ruinous.

But this year turns out to not be as cold as expected. New neighbors sweep in, leasing the plot of land nearby. This idea of ownership is a festering wound to Finney (Christopher Abbott), the jealous, sketchy husband to Tallie (Vanessa Kirby), who speaks her mind and lives with a vigor he can barely tolerate. A crimson-haired beauty with a wide, mischievous smile, Tallie is the friend Abigail has long needed. The closest thing to intimacy Abigail has had with her husband is when he got sick and needed an enema. The conversation about having another child, and the practice of actually doing that, are just too much.

Fastvold centers her film on the unspoken connection between women. Abigail and Tallie recognize their mutual desperation, without saying a word they are drawn to one another. Soon, they are together at all times of the day, much to the ire of the men in their lives. In this remote part of the world, it truly seems like there are no other people in existence other than them. The women probe one another cautiously, the touch of a hand during casual conversation, a fleeting look. Are women supposed to feel this way? It’s suggested lightly that Tallie might have more experience in this, but for Abigail this is strange, pioneering territory.

With an eye towards the interior life of women in this austere landscape, Fastvold’s film is elegantly-told, perhaps too elegant at times to jibe with the authentic hardship and pain that is their frontier existence. It will come as a surprise to some to learn this was always a passion project by Affleck, who acquired the rights a couple of years ago. There’s a connection to Andrew Dominik’s The Assassination of Jesse James by the Coward Robert Ford, a film in which Affleck has one of his first breakout roles in. It was there that Affleck befriended author Ron Hansen, a frequent collaborator of writer Jim Shepard. The duo wrote this script together based on Shepard’s short, with Affleck on board from the very beginning.  What isn’t a shock is the nihilism Affleck instills within Dyer, although our attitude towards him softens in comparison to the awful Finney. Abbott’s trademark intensity is firmly in place, although Finney feels like a stock abusive husband compared to the richly-observed characters around him.

Continuing a run of tremendous performances this awards season (Pieces of a Woman the other), Kirby as fiery as her red hair as the spirited Tallie. It’s Waterston who holds the film together, though, with her well-modulated performance as the reluctant, questioning Abigail.  Cinematographer André Chemetoff grasps on to the bleak greys and browns of unsettled New York, so much so that Tallie stands out like a rainbow after a thunderstorm.

The World to Come posits that these women were born in the wrong time, that if only they had come along in the now. But it’s the simple, impassioned bonds like the one between Abigail and Tallie, charted in letters and notes that stood the test of time, that quietly made a better, more inclusive world possible.