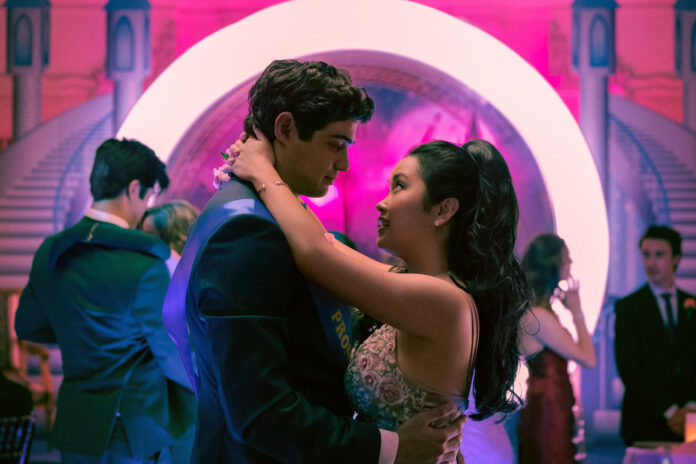 Oh, Peter. You’ve finally found a rival for Lara Jean’s heart that you can’t simply out-smile or out-charm into defeat. Netflix’s adaptations of Jenny Han’s To All the Boys novels have found Peter (Noah Centineo) in constant competition for the love of Lara Jean (Lana Condor), but in the third, most adult, and yet somehow most enjoyable film of them all, To All the Boys: Always and Forever has the couple facing a future where they might not be together.

“Most adult” doesn’t mean the teen angst has somehow vanished. What would these movies be without Lara Jean agonizing over one thing or another? It’s what she does and we love her for it. But what Always and Forever does is ditch the twee love triangle from last year’s P.S. I Love You that didn’t work nearly as well as intended. There’s still a love triangle, only now it’s with a place: New York City. Good luck winning that one, Peter.

Told in episodic format beginning with a family trip to Seoul where Lara Jean is able to visit all of the tourist hot spots and connect with the Korean heritage of her late mother, the film teases a long distance relationship between her and Peter. They’re now firmly in love, with plans to go off to Stanford together, him for athletics and her with a plan to study English lit. It’s all just too cute and too perfect to last, of course. Lara Jean is rejected, and for a stretch it feels like the movie is going to be her attempting to hide this fact from Peter through a series of wacky misadventures, miscommunications, and other humiliations. Lara Jean does embarrassment very well.

Fortunately, that’s not what this movie is. Instead, this couple that has always seemed destined to be together “always and forever” faces real uncertainty for the first time. Not getting into Stanford turns out to be an easily-rectified issue, but when Lara Jean goes on a school trip to New York City, she falls in love with the life she could have by attending NYU, which means being about as far away from Peter as possible.

For once, this is a movie really and truly about Lara Jean and choices she gets to make for herself. She remains wildly immature on matters of love, but you can see the gears starting to turn as Peter barrels his way forward to make sure everything stays exactly how he wants it. He’s not a bad guy, just a guy in love who wants Lara Jean to always be there. But he’s not seeing things from her perspective, and she can sense that maybe this time she has to make a decision for herself, not what’s best for Peter.

The film also explores in greater context Lara Jean’s relationship to her family. She continues to squabble with snarky little sis Kitty (Anna Cathcart) and seek advice from older sister Margot (Janel Parrish), while her father (John Corbett) prepares for his wedding to Trina (Saraya Blue), who is like one of the Covey clan at this point. With the senior prom approaching, a new marriage, and college, change is everywhere and Condor is wonderful as ever in capturing Lara Jean’s confusion amidst the whirlwind, along with a steeliness that wasn’t there in the first two movies. Condor has definitely grown as an actress in that time, exactly in the same way that Lara Jean has begun to grow into the confidence of adulthood.

Once again directed by Michael Fimognari from a Katie Lovejoy script, the film has a lot going on. There are also romantic entanglements with Lara Jean’s friends, new friendships that emerge out of it, and an undercooked subplot where Peter reconnects with his estranged father (Henry Thomas). It feels like an attempt to balance out the emotional scales, but this is undeniably a movie about Lara Jean and it’s better when focusing on her.

I’ll be perfectly honest here; I went into the first film with every expectation to hate watch this surely-undeserved phenomenon. But the story of awkward Lara Jean’s embarrassing attempts to find love and to fit in to a world she didn’t quite understand won me over, and now as To All the Boys: Always and Forever closes the book I find myself wanting her story to keep on going. Maybe not for always and forever, but a few more chapters wouldn’t hurt.