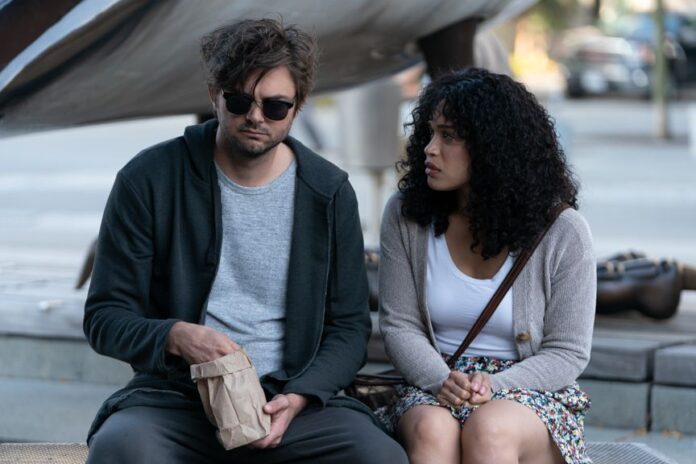 People respond to tragedy in their own way. In The Right One Godfrey (Nick Thune) does so by creating different personas and characters. By escaping into these roles, he doesn’t need to ever be himself and face his past. Sara (Cleopatra Coleman), a romance novelist, is suffering from writer’s block and mild depression about the direction her life is heading. She is coming up on the deadline for submitting pages for a new book but has squandered months of writing time. To make matters worse, her agent Kelly (Iliza Shlesinger) happens to be her best friend and is on her ass. That’s when Sara happens to meet Godfrey, or one of Godfrey’s alter egos, and a writing spark is born. 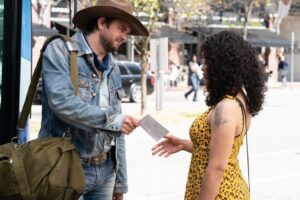 Sara is fascinated by Godfrey and what she knows of his story – which is not much. Godfrey keeps her at a distance, just like he does with almost everyone in his life. He doesn’t want to open up about who he really is or what he has gone through. As Sara gets closer to Godfrey, or his personas, she struggles with not knowing who she is falling for. Sara opens herself up and shares things with Godfrey and then he responds in character – really throwing her for a loop. Regardless of her personal feelings, Sara and Kelly think Godfrey’s story is a goldmine. That is until Godfrey finds out Sara is using him for the inspiration for her next novel. 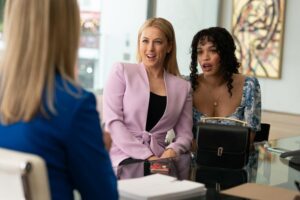 The Right One is the first full length film from writer/director Ken Mok. Mok tries to incorporate humor and drama surrounding grief into The Right One. The film would have been more successful if it had truly focused on either. Toeing the line and never fully committing to either side doesn’t allow The Right One to reach its potential. Mental health and dealing with trauma are incredibly important topics that have a lot of weight to them. Thune delivers a strong performance as Godfrey himself and his personas. However, the real star of the show was Shlesinger. Every time she graces the scene the audience is in for a treat. She plays the overbearing best friend/absurd agent perfectly. The Right One is at its best when Shlesinger and Coleman or Shlesinger and her assistant are interacting. 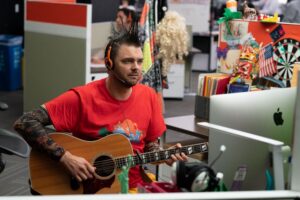 Mok’s script felt uneven, and that became more apparent as the film progresses. The comedic dialogue, especially involving Shlesinger, was on point and hilarious. There was a mix of subtle humor as well as in your face gags. The dramatic side left a lot to be desired. We never fully dive into the grief or it’s ramifications. The audience is also never truly invested in any of the characters. It almost felt like Mok was pulling his punches instead of going all in. The pacing for The Right One suffers due to this. The beginning of the film with funky and upbeat music and gags fades as the subject matter tries to turn serious. Despite the combination not ever coexisting perfectly, The Right One does enough to entertain. It may not be for everyone, but I think Shlesinger and David Koechner’s cameo make it worth the watch.