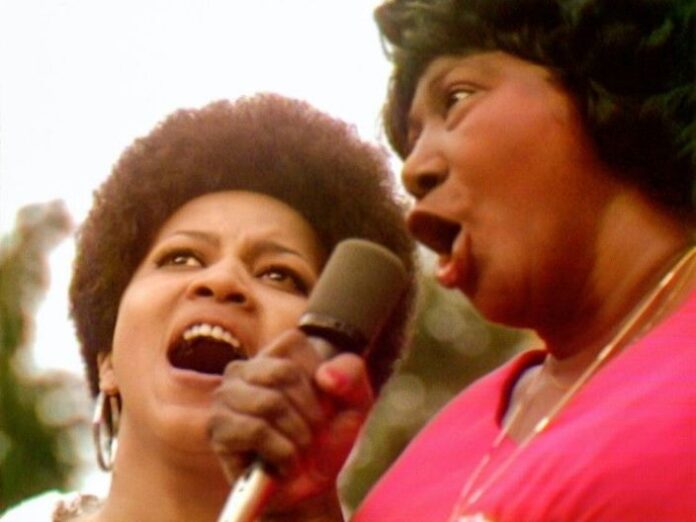 It’s almost unfathomable that something as truly, viscerally alive as the Harlem Cultural Festival could be locked, buried in a basement, for more than fifty years. A rhythmic rainbow of sounds and colors, fueled by the percussive energy of the 1969 civil rights movement and the assassinations of Malcolm X, Martin Luther King, and more, the event regarded as “black Woodstock” drew hundreds of thousands of people, all there to hear the sounds of Motown, gospel, Latin funk, and more. The cost? Not a damn cent.

Summer of Soul (Or, When the Revolution Could Not Be Televised) marks the directorial debut by Roots founding member Ahmir “Questlove” Thompson. It’s also a much-needed addition to the wealth of concert docs out there on bands we’ve seen and heard ad-nauseum, events that have been covered and covered again without a fresh take. The Harlem Cultural Festival is a slice of Black history that has been mostly forgotten, and nearly went undiscovered. Sprung from the mind of singer Tony “The Continental Dreamboat” Lawrence, it was a celebration of Black pride, love, religion, politics, and culture.

Those intersections brought more than just the top musical acts of the time, but figures such as Jesse Jackson and then-New York City mayor John Lindsay. The Harlem Cultural Festival became a crossroads where the leaders of civil rights movement met the Black Power movement (Black Panthers provided security), almost in a passing of the torch. The stage was filled with musicians who tapped into the energy of time and spoke, through their words and music, to the fear and anger many of the 300,000 attendees were struggling with in the turbulent year of 1969.

Footage of the festival was captured by producer Hal Tulchin, who couldn’t find a buyer to take it off his hands. And so it sat until Questlove brought it out of hiding, and pieced together a blast of pure radical energy and spirit. The early portion of the show is like being taken to church, with Mahalia Jackson, The Staple Singers, and more helping everyone feel the hand of God through the power of song. Pop/R&B group The 5th Dimension, featuring the likes of Billy Davis Jr. and Marily McCoo, revved up the crowd while in interviews they spoke about the criticism they faced for their sound, which many said sounded too “white.”

A young Stevie Wonder, Nina Simone, Sly and the Family Stone, B.B. King, Gladys Knight and the Pips, David Ruffin, Abbey Lincoln, Max Roach, Hugh Masekela, Babatunde Olatunji, Mongo Santamaría,  Ray Barretto and so many more spoke to the diversity of acts on hand, which reflected the multi-cultural aspect of Harlem to a tee.

Even a heathen like me considered a conversion at the moment Mahalika Jackson, feeling ill, leaned on Mavis Staples in a performance of the uplifting and powerful “Precious Lord, Take My Hand.” The song, a favorite of Martin Luther King Jr.’s, was performed just a year after his murder. I dare you not to tear up.

Questlove keeps his ambitions small in order to focus on the moment, conducting interviews with those on stage and those who were fortunate enough to be in the audience for this magical day of spirit-filling music. Only occasionally does he break away to focus on a particular subject, like the slick-dressed Lawrence, a go-getter who had begun putting together Harlem Cultural Festivals in 1967 with a limited amount of resources. It’s inescapable the feeling that Lawrence pulled off something of a miracle.

As a filmmaker, Questlove moves with the same confidence that he’s shown on the drums for years. In footage, we see thousands of Black and brown kings and queens in the crowd singing, dancing, loving, and living, all wrapped in the music and the spirit. But make no mistake, they were also preparing for a revolution, a fight that those in power hoped could be quieted with an annual Harlem concert.

“It was like going to war. And we were propelled on a wave of music”, said professor/activist Denise Oliver-Velez.

Questlove’s Summer of Soul is a mixtape tribute to Black pride and excellence. He’s restored an essential moment that now, thanks to his monumental efforts, can be explored to calculate the full weight of its impact. That many of the obstacles faced by minorities at the time still exist today can’t be ignored, and I wouldn’t be surprised if others come calling to try and capture lightning in a bottle once more. If you see a new Harlem Cultural Festival emerge out of this, when racial tensions are higher than ever, don’t fight it. Get into the spirit.