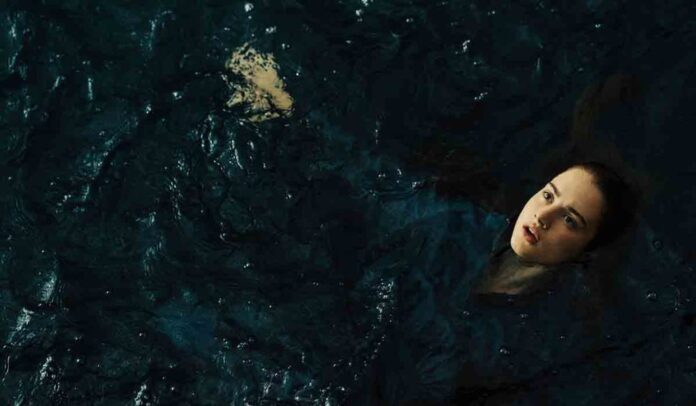 Karen Cinorre’s fantastical, feminist war film Mayday is what Sucker Punch might’ve been if Zack Snyder had no budget to work, a clearer perspective, and a female screenwriter. Both films follow an all-female team of badasses in a fantasy realm borne out of the need for emotional recovery from trauma. But where Snyder failed to have a cohesive idea in the first place, Cinorre doesn’t push her bold ideas far enough, despite the best efforts of a game cast led by Grace Van Patten and Mia Goth.

Shortly before Ana (Van Patten) washes up in an otherworldly realm, we’re introduced to the paltry life she has in our own. A lowly caterer working a wedding, she’s treated like trash by her boss, who berates and physically abuses her. The other men barely notice her at all, with the exception of a couple of co-workers (Théodore Pellerin, Zlatko Buric) who appreciate her company. A couple of new faces stand out, though. Marsha (Goth) is having cold feet before her nuptials, but before the show can go on, an electrical storm shorts everything out. When Ana flips the power back on, she finds herself transported through the looking glass, so to speak.

The WWII-esque world Ana wakes up to is a twisted version of her own. The first person she encounters is Marsha, but this isn’t the scared bride-to-be. Marsha is now giggly, confident, and…well, a killer, as the washed-up male soldier seeking aid soon finds out. In this reality, Marsha leads the rugged Gert (Soko, on a roll right now with Little Fish and The Blazing World), and skittish Bea (Havana Rose Liu) in luring any man they can find, usually with a “MAYDAY” distress call, to his unsuspecting death. 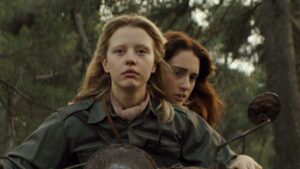 “Girls make excellent snipers“, Marsha says. More than just a quick friend, Marsha is drill instructor, but make no mistake, she’s also a murderous fanatic. She teaches Ana how to make her voice softer, to show weakness, because men can’t resist a woman either in distress or subservience. She also says radicalizing things like, “You’ve been in a war your entire life, you just didn’t know it.” In this place, women are done trying to make nice with the men who have mistreated them. This is a place of vengeance.

But is this a dream? Some form of purgatory? Cinorre is never really clear and getting bogged down in the details would be a drag. Unfortunately, the lack of clarity allows for a bending of its own rules, and a looseness of tone that is distracting. An impromptu musical number, done in “Bugle Boys of Company B” style, might be Cinorre’s way of auditioning for another movie, but it only serves as a distraction from a very dark, provocative viewpoint.

There’s a visual power to the sight of these women, taking control of their lives and thriving in a genre that is usually the realm of men.There’s a real lack of narrative direction, though, both in the larger battle and the internal one as the power balance shifts among the women. While it’s good to see Goth in a role that doesn’t call for her to play meek or ominous, Marsha is written inconsistently throughout and some of her actions don’t feel as if they are leading to anything in particular. What is the ultimate goal? What are the stakes? Van Patten, who broke out with Netflix film Tramps a few years ago, continues to channel Shailene Woodley both in look and in her measured performances.

Cinematographer Sam Levy captures gorgeous coastal views that add a surreal, fairy tale quality to this strange battlefield.  Mayday presents a unique landscape, one in which women take violent control of their own destinies. The world Cirrone has envisioned is worthy of revisiting, as a reflection of the treatment women face today there are endless stories to be told. Let’s just hope the next time, Cinorre is willing to really push the envelope.