Home TV Netflix Review: ‘Outside The Wire’Anthony Mackie Is An Advanced Android Soldier In An...
Facebook
Twitter 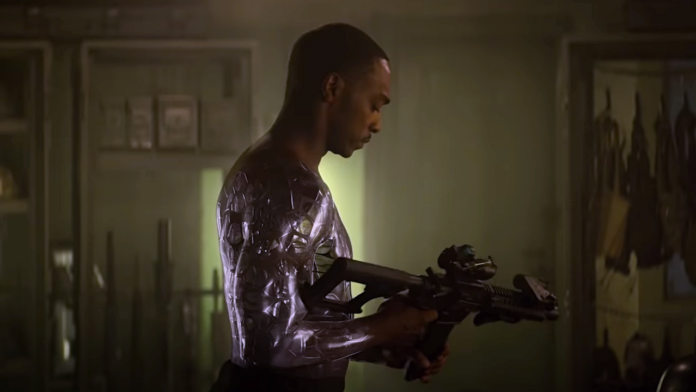 Netflix’s latest “quick grab” action flick Outside the Wire is a hodge-podge of various military scare-tactic films. You’ve got Terminator and the fear of technology run wild, District 9 and a robot class separate from that of humans, and even a little bit of Good Kill, and the problem of collateral damage caused by drone fighter pilots who’ve never seen real combat. It’s a film with a little bit of something on its mind, but not enough to prevent it from being a conventional sci-fi military thriller that should attract a lot of attention from the streamer’s audience.

Plus it stars Anthony Mackie, and that’s always a good thing. The charismatic Avengers actor plays Captain Leo, and when we first hear about him it’s being explained to hot-shot, insubordinate drone pilot Lt. Harp (Damson Idris) that he’s “not like us.” Well, what’s that mean? Because he’s black? Or because he’s antisocial, works alone in a warehouse listening to jazz records while analyzing more data than an entire unit could in a lifetime? No, it’s more than that, and few know it. Leo is actually an advanced cybernetic combat soldier, designed to look, feel, and act human. He even has the capability to build his own personality, and he’s chosen to be…well, Anthony Mackie. He’s cool as a cucumber, jokes with casual ease, and curses like a shipload of sailors.

So what could Leo possibly want from a court-martialed drone pilot like Harp, anyway? The film begins as Harp, sitting at a desk eating candy while watching a firefight between U.S. soldiers and robot combatants, directly disobeys an order not to launch a drone missile attack. The result is the death of two officers, while dozens of others are saved. It’s that willingness to bend or break the rules to do what’s right that Leo likes.

What follows is a clandestine mission to deliver vaccines “outside the wire” and into dangerous, enemy territory. Firefights are not only expected, they are assured, and within minutes Leo and Harp are engaged in a massive battle that sees human and robot military bloodied or blown up. Without getting too deep into the twisty plotting, it turns out Leo’s task is much greater than he let on. A meeting with a spy/rebel leader (Emily Beecham) reveals a plot to take down terrorist Viktor Koval (Pilou Asbaek) before a nuclear threat can be unleashed. There’s quite a lot more to it than this, but that’s the gist for the most part. In pursuit of this, Harp and Leo find themselves engaged in ever-escalating battles in wartorn areas all across the map.

While the action is high-intensity throughout, screenwriters Rowan Athale and Rob Yescombe have more on their mind. Between battles, the unlikely droid/human duo have a philosophical war over the greater good, and Harp gets to see the real tragic impact of his actions up close and personal. As Leo begins to twist and manipulate his young sidekick, Harp’s ideas begin to evolve, but will they be to the mission’s success or hindrance? These conversations are frequent, heavy on exposition, and clearly a point of interest for the writers, but they also aren’t particularly involved because the momentum needs to stay up at all times. When it stops, Outside the Wire becomes considerably less interesting.

Explosions, “cool” robots (the CGI is passable at best), and a ticking bomb scenario are what these Netflix blockbusters really expect to grab viewers and that’s what Outside the Wire provides more than anything else. Mackie is predictably good in a role well-suited to him, showing off the comic timing and physicality that many can’t wait to see more frequently in Falcon and the Winter Soldier. He gets along well with Idris, in a similar way as Denzel Washington did Ethan Hawke in Training Day. The frustration Leo feels as he schools his naive partner about the real world is the movie’s greatest source of tension, which is both a good and bad thing. The larger threat never feels as immediate as it should, and Leo, for all his advanced tactics, never rises above your typical edgy action movie hero. And as Leo goes, so goes Outside the Wire, which is entertaining enough, high-concept enough, but nothing more.