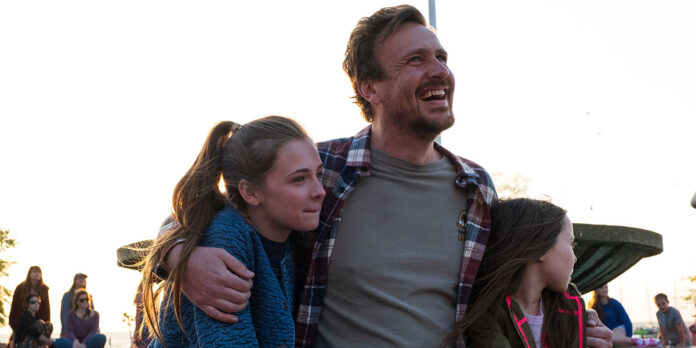 What kind of person gives up everything in their life to spend years helping a friend through a difficult time? You might say someone who has little going on in their own life, and that would certainly be true in the case of Dane (Jason Segel) in Gabriela Cowperthwaite’s tender, poignant and scattershot drama, Our Friend. But also the kind of person with such deep reservoirs of empathy and compassion that someone would invite him in when most would want to shut the world out.

Our friend, which debuted at TIFF 2019 and has been delayed for various reasons, is based on an Esquire article written by journalist Matthew Teague, played by Casey Affleck. The remarkable true story is of Matt’s wife Nicole (Dakota Johnson), who at 34-years-old was diagnosed with cancer. Seeing that his friend was unable to cope with her deteriorating health, caring for their two daughters, and managing a household, Dane moves into their home to provide whatever kind of support is needed in the moment.

The most gut-wrenching scene occurs right off the bat, to be revisited in fuller context later with equally heartbreaking results. Matt sits outside on the porch, keeping the daughters entered and happy while inside a more somber discussion is being had. Nicole has realized it’s time, a time no one of her young age should have to consider. It’s time for her and Matt to tell the girls that she is dying. The cancer has become terminal. How does one gather the strength to do that? It’s clear Matt doesn’t have it. At least not if he had to do it alone.

Our Friend is filled with moments like this, where the bounds of friendship are examined in many different ways. Can someone still be considered just a friend if they are literally the person you lean on most through the most tragic experience of your life? The film bounces around in time, using the year of Nicole’s diagnosis as a grounding point. The earliest is thirteen years prior, when Matt was this self-serious, ambitious writer at a local paper, and Nicole a theater actress with dreams of Broadway stardom. Dane? He was that guy forever in the “friend zone”, and had asked Nicole out for a date without knowing she was married. Matt didn’t want to meet him; why would he? But after meeting Dane, seeing how harmless he truly was, they became best friends. In their first encounter, Matt, prone to chronic fainting spells, gets light-headed and it’s Dane who is there to catch him.

Penned by Brad Inglesby, known for his Out of the Furnace and The Way Back scripts primarily, Our Friend‘s non-linear approach can be hard-to-follow, at least in connecting where relationships stand at certain points. Matt and Nicole’s marriage is far from the perfection most of these weepies like to present. He’s selfish and makes life-changing decisions, such as taking a war correspondent gig in Libya, without consulting her. She takes an interest in another man, largely due to the fact her husband is so rarely at home. And in the middle is Dane, and while there isn’t a traditional love triangle going on, there is in the sense that he loves both of these people unconditionally and won’t play one side against the other. Does he carry any romantic feelings for Nicole still? There are moments it seems like he does, but thankfully the film doesn’t go down that route and add a creepiness component.

At the same time, one does wish the film delved a bit deeper. For a film that goes to fine detail in charting the daily, mundane aspects of watching a friend slowly perish, it moves around so much that it rarely offers the chance to let us feel the weight of what everyone is going through. Most of all, we need to connect with Dane, who is clearly doing this, in part, to give himself some purpose. This selfless act of his doesn’t come without sacrifice, including relationships with women that seem like they could lead to something meaningful. He becomes all things to Matt and Nicole, both a brother and a father-figure of sorts, but also a nanny and companion.  There are large swaths of the film where the focus leaves Dane, however, usually to flesh out the contours of Matt and Nicole’s marriage, and that’s when Our Friend feels adrift because Dane is our lens into this sad, and yet strangely hopeful story.

We’ve grown accustomed to Segel as the lovable, awkward friend and he brings elements of that here, as well. It struck me that no matter how comedic Segel’s roles he has a shaman-like quality. That through the clumsy, oafish exterior there’s a wisdom that catches us by surprise. That makes him perfect for Dane, who others outside of Matt and Nicole perceive as a curious loser. But he means so much more to the people who know him best, which is why it’s so touching, and a bit tragic, when Nicole tells him she wishes other women knew how special he was.  It’s a credit to Segel’s performance that we never look at Dane as an interloper, or a weirdo, or somebody who doesn’t belong. He’s the family’s constant calming influence and we’re never given a reason to question that.

Affleck and Johnson are good as well, in roles that demand far less. Johnson exudes vitality whether Nicole is in the full vigor of her youth and even as she begins to fade. Physically, we see her becoming thin and pale, eyes distant then full of rage. Affleck is, of course, somber and aloof. That’s sortof his thing, isn’t it? And Affleck knows his strengths which is why he gravitates to these roles. It makes sense given the burden Matt has to carry that he look emotionally drained all of the time, although if there’s anyone who can make him crack a joke it’s Dane.

To alleviate the dark cloud hovering overhead, Our Friend mixes in its share of affecting, spirited moments. Nicole’s bucket list items, which include being Grand Marshall at a Mardi Gras parade and hanging out with Katy Perry, are a lot of fun if wisked through a bit quickly. And there are two incredible cameos by Gwendoline Christie and Cherry Jones as women who provide support at crucial times. Kindness, both of the simple and the extraordinary variety, is what Our Friend is all about. And without getting too maudlin about it because the movie never does, I think a lesson in being there for one another is something we could all use right about now.