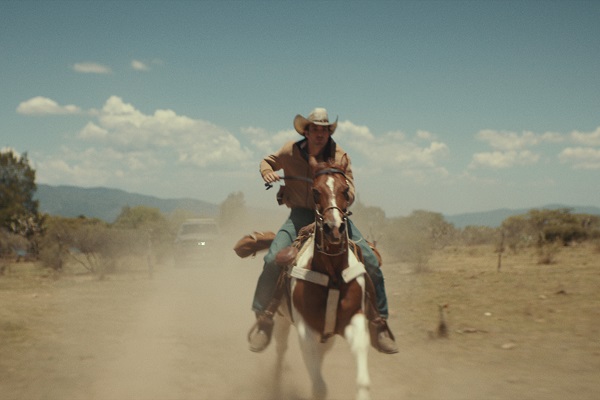 Director Conor Allyn, fresh off last year’s feel-good Netflix movie Walk. Ride. Rodeo. attempts to once again delve into the Western genre, but instead of dealing with rodeos and horseback riding, we’re in the world of farmers, immigrations, and coyotes. Along the border between Texas and Mexico, there is a de facto “border wall” that separates the two countries by the Rio Grande river. That area is effectively called “no man’s land,” hence the title of the film No Man’s Land.

In No Man’s Land, the Greer family are simple farmers who tend to their ranch. The patriarch Bill (Frank Grillo) tries his best to raise his cattle and care for his wife Monica (Andie MacDowell) and sons Lucas (Alex MacNicoll) and Jackson (Jake Allyn in the lead role). Because they live literally on the border, they sometimes have to deal with people crossing through their farm in their attempts to make it to America. For the most part, they are harmless as they are migrants trying to make it to the US, but lately because of cartels and ill-favored coyotes, they have to keep their guard up. Sometimes their makeshift barbwire fence gets cut down, which causes their livestock to escape, so they are a little on edge. Everything changes when Naturalized US Citizen Gustavo (Jorge A. Jiménez) is coming back from Mexico to smuggle his family across the border and are confronted by the Greer family

Thanks to a language barrier (it’s weird that a family so close to Mexico doesn’t speak a lick of Spanish) and raised tempers, a scuffle breaks out, which causes Lucas to be shot (by accident), but leads Jackson to shoot Gustavo’s son in the back, killing him dead. After Gustavo is forced to leave his dead son behind to flee from Sheriff Ramirez (George Lopez), Bill takes the blame saying that he shot the young boy so that his son Jackson doesn’t get into any trouble. Turns out Jackson is good at baseball and might get recruited to play for the Yankees’ minor league team and something like murder just might ruin his chances. However, Sherriff Ramirez (who ALSO doesn’t speak a lick of Spanish) starts to realize that the culprit is Jackson and not his father, causes Jackson to go on the run, escaping across the Rio Grande into Mexico.

From there on, Jackson has to hide in Mexico, where once again, he doesn’t know any Spanish. He wants to return the young boy he murdered’s wallet to his family, but now he has to go through his own immigrant experience. He has to be smuggled into town, he has to find work so that he can feed himself. Slowly but surely, Jackson has starts to develop empathy for the people who he has always seen as “the other” and reshape his worldview about not only Mexicans, but Mexico itself.

Unfortunately, that is the main problem with No Man’s Land. The audience is expected to have empathy for Jackson as he goes through Mexico as an “illegal alien,” but forget that he shot a child in the back. It’s a very hard cognitive dissonance that isn’t really earned throughout the film. No Man’s Land would have been better off centering on Gustavo, who goes through a much more impressive arc as he enacts his own quest for revenge against Jackson. While actor Jorge A. Jiménez does have a great arc, it was once again in service of the white male lead of the film.

Director Conor Allyn probably shouldn’t have kept so much in the family as well. Casting Jake Allyn as a 17-year-old high school baseball phenom didn’t really work as well though. He just seemed a little too old for the role he was supposed to play, and the whole baseball angle goes on far too long and the payoff for it is eye-roll-inducingly cheap. The introduction of psychotic coyote Luis (Andrés Delgado) who’s whole focus seems to be just to hunt Jackson even though he’s got no skin in the game, other than to be an “evil Mexican” in the film.

That said, No Man’s Land does have some great performances by George Lopez, who normally is known for his comedic bits, but plays it completely straight. But once again… he doesn’t speak Spanish as the sheriff of a border town! Fans of Frank Grillo’s action movies will be a little disappointed as this completely is not that type of role for him. As the patriarch, Grillo’s more measured and calmer than we are used to. Unfortunately, Andie MacDowell doesn’t have much to do in the film.

Billing itself as a modern-day Western while not really feeling like one, No Man’s Land instead tries to tackle the subject of immigration in an empathetic way, but unfortunately, by focusing on the wrong character for an effective story, it goes into formulaic territory.

No Man’s Land is currently available on VOD.