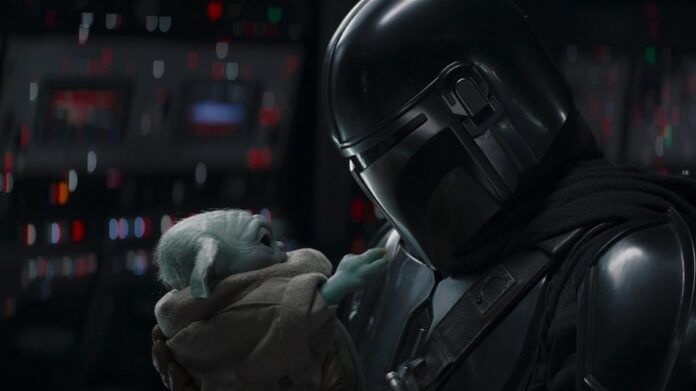 When Star Wars is at its best, I’m not sure there’s anything that measures up. At least for me, nothing puts me on a high quite like a great Star Wars experience, and the season 2 finale of The Mandalorian, titled “The Rescue” has me up in Cloud fucking City.

BTW, there will be SPOILERS all over this shit. So just be warned.

This episode has, I think, my favorite five minutes ever in the history of Star Wars, and they come right at the top. Boba Fett (Temuera Morrison) disabling an Imperial ship carrying Dr. Pershing, followed by Mando (Pedro Pascal), Fett, Fennec Shand (Ming-Na Wen) and Cara Dune (Gina Carano) soliciting the aid of Bo-Katan and Koska Reeves (played by the returning Katee Sackhoff and Sasha Banks) in the rescue of Grogu aka Baby Yoda, which leads to a tense conversation about Fett’s not being a real Mandalorian. When a brawl breaks out between Fett and Reeves, she hits him with a rocket-propelled tornado DDT that I wish could be her new WWE finisher.

We’re getting rasslin’ moves in Star Wars and it’s the greatest thing ever.

Also, I would take an entire series of just Mandalorians arguing with one another about factions and honor and other warrior bullshit. Actually, we might be getting that. More on that later. With Pershing in tow, Mando and Co. fake an aerial dogfight so they can get aboard Moff Gideon’s (Giancarlo Esposito) ship. While this is a ragtag bunch, I don’t know if there has been a more badass squad ever assembled in Star Wars. They cut through the Stormtroopers easily, but face Gideon’s robotic, and positively evil-looking Dark Troopers. Just one is enough to literally batter Mando into the walls, and if it wasn’t for his Beskar armor he’d be Mandalorian pulp.

This episode is practically wall-to-wall action, but the seeds of future stories are sewn throughout, both within this series and possibly the spinoffs. Mando has lost everything at this point, and his desperation, his willingness to battle everyone and everything to get Grogu back can be felt through his helmet. Bo-Katan’s only real interest is in reclaiming the Darksaber from Gideon, which will give her the edge in becoming the new Mandalore, while Cara Dune, still enraged over the destruction of Alderaan, needs Gideon alive because she works for the Republic.

A pitched but brief battle between Mando and Gideon leads to a clash of Darksaber vs. Chekhov’s Beskar spear. It’s an even fight for the most part, with Gideon showing he’s a true warrior and not like the Empire’s other privileged stiffs. He’s just as scummy, though, and reneges on a deal to hand over Grogu in exchange for being allowed to walk away unharmed. Never trust a Moff!

Mando does come out victorious, and when brought to the team Gideon immediately starts exposing their many conflicts of interest. For starters, Mando can’t simply hand the Darksaber over to Bo-Katan. She needs to defeat him in battle in order to earn its true power, meaning there’s going to have to be a fight at some point.

That’ll have to wait, though, because there’s the pressing issue of Gideon’s Dark Troopers pounding away on the door outside. If they get in, it’s over. This simply awesome band of fighters don’t stand a chance. Gideon reminds them that only he and The Child will walk out of that room alive, and for a moment it seems he’s actually telling the truth.

Oh, Cara. Don’t you know it was a lone X-wing that took out the Death Star? And who was the pilot of that X-wing?

As everyone watches the monitors with a mix of shock and horror, a robed figure emerges and begins slicing his way through the Dark Troopers, flashing a familiar green lightsaber. He cuts through them, rips others apart with the Force, hurling others away like garbage.

At this point, I was sitting up in my chair, mouth open and drooling, saying “It CAN’T be who I think it is…”

When this mysterious figure gets to the door, Mando demands it be opened, to which the others aren’t quite so sure. But when it does open, who should step into the room but Luke Skywalker!! Yes, it’s a CG Luke of his younger self because, as I think we tend to forget, The Mandalorian takes place just five years after Return of the Jedi. This series has felt so distant from the original trilogy that the arrival of Luke Skywalker sent chills down my damn spine. It’s amazing the power that character still holds. 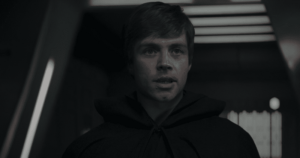 And as Luke was furiously dispatching those droids in the hallway, all I could think was how much he looked like his father just then. The mix of ferocity and grace of his attack, with just enough of an arrogant flourish. The apple doesn’t fall far from the tree.

“Are you a Jedi?” Mando asks. Luke responds, “I am,” before gesturing to Grogu, “Come, little one.”

Grogu is hesitant, but Luke reassures that he is simply waiting for Mando’s permission to go. This is what they have been fighting for this entire time, to bring Grogu to the Jedi so he can be trained properly in the Force. Luke warns that a powerful Jedi like Grogu will always be under threat without training, and that he will give his life to ensure his safety.

But it’s still a very sad goodbye, one that finds Mando removing his helmet, willingly unlike last week, to have one final unobstructed look at his friend that he cared for like a son.

Then R2-D2 rolls up and Grogu instantly takes a liking to the little droid. So there ya go. Mando gets ditched for a tin can.

When the door closes behind Luke and Grogu, with a final “May the Force be with you”,  the credits roll but that isn’t the end. A post-credits scene takes us to Tatooine and what used to be Jabba the Hutt’s palace. Only now, his former servant Bib Fortuna sits on the throne, looking like he’s been living like a fat Twi’lek this entire time. But that comes to quick end at the end of a blaster rifle as Fennec Shang and Boba Fett appear. With Bib dead, Fett assumes the throne while Shand chugs some blue liquor by his side.

Holy shit. The Mandalorian has a new spinoff! And they didn’t spoil it at last week’s Disney showcase, those scoundrels!

This episode was directed by Ant-Man’s Peyton Reed, and I wouldn’t be surprised if he had a budget equal to that Marvel film. This was basically a movie condensed to about 45-minutes, and as we’ve seen in previous episodes it manages to accomplish a lot in a short timeframe. The Mandalorian has more on its shoulders than just progressing a single story now. There are spinoffs to account for, and those get moved forward well enough that we have reason to be excited.

The Luke Skywalker reveal was just insane. It’s CG so he does come across as a little cold, but that sorta works for where his character was at that point in time. So…if Grogu is with Luke, does this mean he becomes part of Skywalker’s Jedi Order, which we know ends in ruin? I have a bad feeling about this, but something needs to account for him not being around for later films. Perhaps he’s in hiding, as the original Yoda was?

Breaking up Mando and Baby Yoda was a mixed bag, a bittersweet moment we all knew was coming but hoped would never arrive. This season really stepped it up in every facet. The production quality was better, the episodes were more cohesive, and the big moments REALLY paid off.

So much happened this season that the return of Boba Fett is just another day at the damn office. Think about that. It’s wild.

For me, the greatest thing The Mandalorian accomplished with season two is remind me how great Star Wars is when it’s managed by people who love everything about it and respect the fans who feel the same way. It’s no secret The Rise of Skywalker really killed my enjoyment of this franchise. There was no joy, no passion. I watched it and saw all of JJ Abrams’ grievances with the prior film splayed out, rather than taking what was there and making it better. Telling a story that entertains and thrills the fans was back of mind.

You can see it in every frame of The Mandalorian how much Jon Favreau and Dave Filoni love Star Wars. They can’t get enough of it, can’t get enough of exploring it, and it feels like they’re putting things right. If Lucasfilm were smart they would make them the Star Wars version of Kevin Feige. As long as they are around, we have every reason to be hyped for season 3 and beyond.