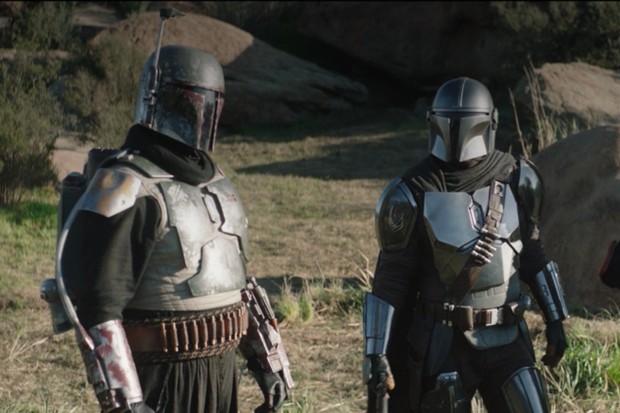 With an episode titled “The Tragedy”, we knew shit was definitely about to hit the fan. I’m not sure we were prepared for this, though.

The Mandalorian heads into the final stretch this week, with the meeting that fans have been waiting two whole seasons for.  Din Djarin, say hello to Boba Fett.

This episode is a bit shorter than others we’ve seen this season, but no less exciting, with numerous callbacks to the first season, the return of multiple fan-favorite characters, and, oh yeah, more revelations about Baby Yoda…er, Grogu. It’s also a story perfectly-suited to the skills of director Robert Rodriguez, as the majority of the 34-minute runtime is a big battle between Mando and his new-ish companions.

After last week’s killer episode with Ahsoka Tano, I think a downbeat episode would’ve been expected, but no dice. Right away Mando and Grogu are soaring to the destroyed Jedi temple on Tython, where the child is expected to discover the true nature of his powers. But first, a cutesy opener with Grogu and that shiny orb he loves reveals that his powers are growing stronger, more precise. Furthermore, it’s obvious that Mando has become invested in his development and safety. We’ve known this for a while, of course, but it’s made clearer here for a reason that will emerge later.

Arriving on Tython, Grogu doesn’t seem to understand what he’s supposed to do. As Mando grows impatient, an ominous ship is seen flying overhead. We know that ship. Any Star Wars fan knows that ship. It’s the Slave 1, the ship belonging to Boba Fett, long thought dead since his encounter with the Sarlaac Pit in The Return of the Jedi. However, his return was teased in the fifth episode of season one, as rescuer of a near-death Fennec Shand (Ming-Na Wen) on Tatooine. Well, wouldn’t you know it? They’re BOTH here on Tython, working together to get Fett’s armor back. The same beskar metal armor Mando acquired from Cobb Vanth back earlier in this season.

Devotion and honor play a huge role throughout The Mandalorian, and that trend continues. There’s a testy exchange between Mando and Fett, the latter played by Temuera Morrison, same actor who was Fett’s father Jango in the Star Wars prequels.  Fett repeatedly questions whether Fett is a Mandalorian, which he denies, claiming to be on his own now. Mando says it would be against the Creed to give up the armor. The Mandalorian is so divided up into various factions that every interaction between them plays out aggressively, which I absolutely love. All of machismo settles down when an Imperial ship arrives, and they strike a bargain to exchange the armor for help in protecting Grogu, who has finally connected with the temple and is encased in an impenetrable blue force field.

How do we know it’s impenetrable? Because Mando tries to get in. A lot. And fails. A lot.

Much of the episode involves Mando, Fett, and Shand fending off waves of hapless Stormtroopers. We’ve seen the Imperial troops get waxed before, but Rodriguez brings an extra special brutality to it this time, which I suppose is to be expected. This is basically a showcase for Boba Fett, who tears them to shreds almost single-handedly, using a hooked spear, a nifty rocket punch, and his jet missile launcher to decimate their forces. Shand looks like a badass here, too, and it’s always great to see Ming-Na in action. She’s just incredible at everything.

The simplicity of the plot actually allows for the main narrative to speed ahead at warp speed, however, rather than get bogged down in exposition. A sleepy Grogu is captured by Moff Gideon (Giancarlo Esposito) who sends an army of his robotic Dark Troopers in where the Stormtroopers failed.  After that, Dr. Pershing is only a hyperspace jump and a phone call away, but not before Grogu offers one last hilarious display of his powers.

With the Razor Crest destroyed by Gideon’s cruiser, Mando is left without a lot of options. Fortunately, he’s found a pair of new allies in Fett and Shand, who are now indebted to securing Grogu’s safety.

As if that wasn’t enough, we also get a continuation of Cara Dune’s (Gina Carano) story, as Mando pays her a visit seeking help. Her path forward has gone exactly as it was teased a few episodes back, as her role as Marshall has her on the side of the New Republic. Still, she can’t refuse Mando’s help in freeing imprisoned sharpshooter Migs Mayfeld, who we saw last season played by Bill Burr. Yeah, Bill Burr is coming back, too.

This is an absolutely loaded episode even though it’s light on story. There’s more stuff that happens of significance that I’ve left out, too. The minutes pass by at the speed of light, so it’s easy to miss how many little details are included and the questions they raise.

For instance, the back-and-forth between Mando and Fett is very interesting and loaded with items ripe for exploration. Fett demands his armor back from Mando, who refuses because of his Creed. He can’t give it away to someone who isn’t REALLY a Mandalorian. So what does that mean? Because Boba Fett is a clone of his father Jango, does that mean he doesn’t get the same recognition as, well, I guess a TRUE Mandalorian? It’s wild to consider that Boba Fett, who we all grew up with as the O.G. Mandalorian, isn’t even really one of them.

Only a couple of episodes remains, and at this point we can assume there will be no time to stop and take a breath. With Boba Fett sticking around, at least through next week along with Fennec Shand, the return of Migs Mayfeld, and more of Moff Gideon’s evil plans for Grogu, The Mandalorian is growing more ambitious in the amount of story it wants to tell week-to-week. Strap in!