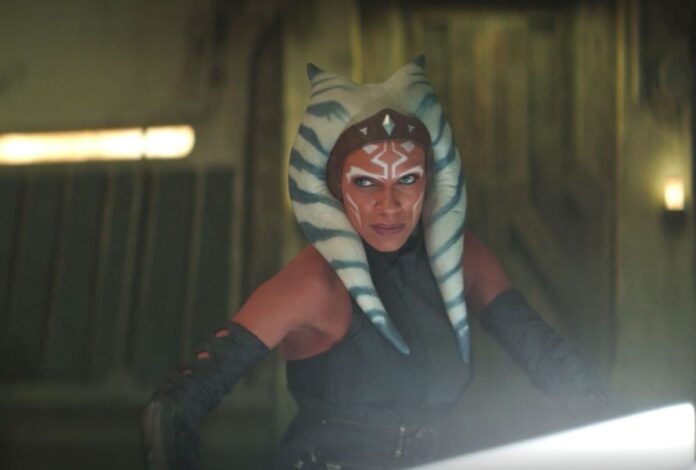 There’s going to be no shortage of Star Wars shows on Disney+ over the next few years. Tell that guy who complains about The Mandalorian he can go sit down now. Coming our way are the long-expected Ahsoka Tano spinoff series, plus one that sounds like it MIGHT center on Gina Carano’s Cara Dune, the project that we’ve known about from Russian Doll creator Leslye Headland, and finally a Lando Calrissian series that we can only hope will take place on Cloud City with Lando as a swinging bachelor.

Let’s start with The Mandalorian spinoffs. First up is Ahsoka, which will be developed by Jon Favreau and Dave Filoni, and of course will star Rosario Dawson as the non-Jedi. The series will find Ahsoka on the hunt for Grand Admiral Thrawn, and most likely involve the return of Ezra Bridger. The threads from Star Wars Rebels and The Mandalorian are being picked up on this one.

Ahsoka, a new Original Series, starring @RosarioDawson and set within the timeline of @TheMandalorian, is coming to @DisneyPlus. pic.twitter.com/jD8byvNvDP

Next up is something new, a series titled Rangers of the Republic. More than likely this will include Gina Carano as Cara Dune, who this season became a marshall for the New Republic. Coincidence?  Maybe she’ll be leading her own squad in missions against the Empire? Or maybe it’ll be like the Star Wars equivalent of a crime series?

Both shows will connect to and intertwine with The Mandalorian, which could mean larger story arcs going forward.

Rangers of the New Republic, a new Original Series set within the timeline of @TheMandalorian, is coming to @DisneyPlus. pic.twitter.com/EMzFuiqdOs

Need more? Okay, how about Lando, an event series featuring everybody’s favorite duplicitous playboy, Lando Calrissian. Interestingly, the series will be headed up by Dear White People and Bad Hair director Justin Simien. That, to me, could be awesome if Simien explores the issue of race in the Star Wars universe. It’s something we haven’t really seen before. We can only hope this means Donald Glover will be back and rockin’ the cape.

The galaxy’s favorite scoundrel, Lando Calrissian, will return in Lando, a brand-new event series for @DisneyPlus. Justin Simien (@JSim07) is in the early stages of developing the project.

Early this year we learned that Russian Doll creator and Bachelorette director Leslye Headland had a female-centric Star Wars series in the works, one with martial arts elements to it. Well, now we know it will be The Acolyte, which is awesomely described as “a mystery-thriller that will take viewers into a galaxy of shadowy secrets and emerging dark-side powers in the final days of the High Republic era.”  Um, yes please. This sounds about as close to a Knights of the Old Republic project as we’re likely to get.

Finally, two animated shows are on the way, as well. Arriving next year is Star Wars: Visions, “an Original Series of animated short films, celebrates the Star Wars galaxy through the lens of the world’s best Japanese anime creators.”

That will be followed by A Droid Story, a joint series from Lucasfilm Animation and Industrial Lights & Magic described as an  “epic journey will introduce us to a new hero guided by R2-D2 and C-3PO.”