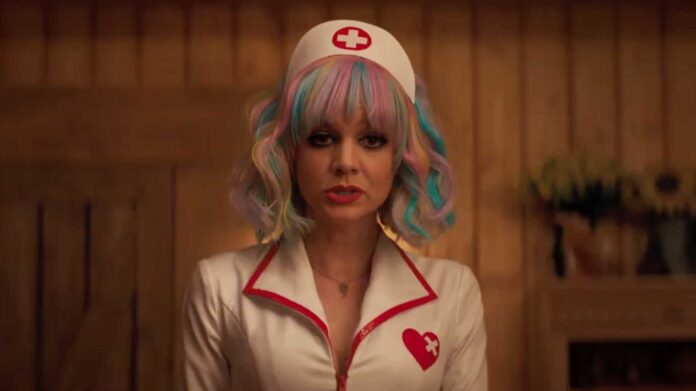 NOTE: This is a reprint of my review from the Sundance Film Festival.*

If Emerald Fennell’s raging #MeToo era revenge film Promising Young Woman was just Carey Mulligan out for blood against predatory men, that would be pretty cool. I would be down for that movie. There’s so much going on here, though, that Fennell has in mind. She’s pissed off, and this is a pissed off movie with a pissed-off protagonist in Cassie (Mulligan), a 30-year-old coffee shop employee who spends her nights as a vigilante of justice, luring “nice guys” in by pretending to be too-drunk to know what’s going on, and then seeing how far those gentlemanly men will go with her.

It’s a fun premise, and Fennell goes for it with gusto, bordering on the surreal. But there’s nothing outlandish about Cassie’s mission, or the anger she feels at a world too eager to dismiss female victims of assault and give men a free pass to live their lives. The women they leave in their wake get no such accommodation; for some of them, their lives are over. Cassie knows this intimately. The vengeance she seeks isn’t for her, it’s for someone close to her who is now gone, but Cassie’s life has been over just as much since the attack occurred.

Cassie was top of her class in med school before everything went south. Now she’s lonely, depressed, and living at home with her concerned parents (Jennifer Coolidge and Clancy Brown) who aren’t shy about wanting their daughter to move on. That’s not going to happen, though. She’s got a job to do, and woe to the men who pick her up, staggeringly drunk, from the club and offer her a ride home; or the guy who ignores her pleas to go home and instead offers her cocaine before shoving his hand inside her; or the men who raped her friend and videotaped it, then got away scot-free.

Fennell’s twisted mind has her casting these heinous men with non-threatening actors such as Adam Brodie, Christopher Mintz-Plasse (McLovin? Say it ain’t so!!), Max Greenfield, and more. But there’s one man who may not be so bad and may even pull Cassie away from her life of retribution, and that’s the pleasantly dorky Ryan (Bo Burnham), a former college classmate who has been carrying a torch ever since. As their relationship deepens, a question begin to emerge: Why should Cassie believe any of these men are as good as they claim? The world has already proven it doesn’t want to believe women, or it holds them responsible for making themselves vulnerable to attack. The excuses are ready-made to let guys off the hook: She shouldn’t have had so much to drink; She was asking for it; It was his word against hers and innocent until proven guilty.

The tone swings violently but never gets out of Fennell’s control. At times moody and sorrowful, it also borders on fantasy during Cassie’s happy romantic interlude. Anytime people are jamming out to the vapid sounds of Paris Hilton, something outside the bounds of real-life must be going on. There’s never a moment that feels inauthentic, however, as shameful as that might be. The things men say and do, Cassie’s rage, all of it is uncomfortably real and demands to be addressed.

Carey Mulligan is too-perfect for the role of Cassie, with her disarming beauty and slight frame, she looks like an easy mark. But she’s nobody’s prey, and Mulligan is more than equipped to show the price that comes with Cassie’s vengeful actions. With Margot Robbie as one of the movie’s producers, one can easily see her taking on the role. Cassie even dons a very Harley Quinn-esque dress when in damsel mode. Apparently, the guys can’t resist a woman with rainbow hair.

Promising Young Woman is a movie that takes big risks; some of them payoff and some of them don’t. However, you have to admire the sheer ballsiness of them, including a final act that goes so far beyond our expectations it’s guaranteed to cause a shit storm of debate. This is a movie that is willing to go above and beyond to be heard. The time for conversation is over, the time for action is now.