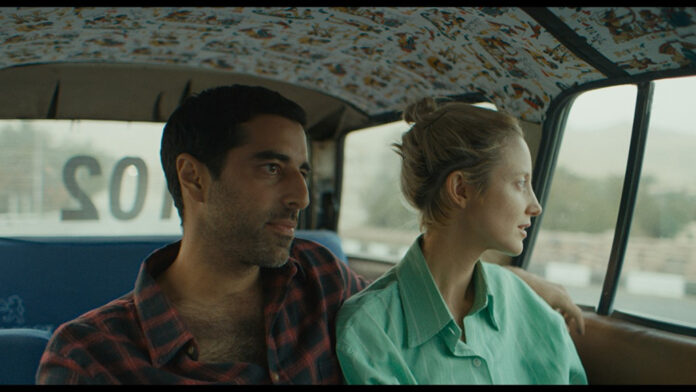 How does one get over tragedy when surrounded by constant reminders of what was lost? It’s a question at the heart of Zeina Durra’s thoughtful mood piece, Luxor, one of about a half-dozen Sundance films led by Andrea Riseborough over the last couple of years. This one has flown under the radar more than the rest, as it’s a deeply contemplative drama that doesn’t cry out for attention. However, the stillness of this PTSD romance can be an intoxicating allure, when not stifling to a meditation on memory and moving forward from the past.

Riseborough plays Hana, a wartime medic who has seen unimaginable cruelty and death during the Syria/Jordan conflict. In need of a break from the world, she decides to return to the Egyptian city of Luxor, a place where she found much happiness in her 20s. As she wanders, almost zombie-like, taking in the sights, she’s surrounded by tourists more interested in photos than appreciating the history, the mythology, the splendor of where they are. The emotional wounds Hana has suffered aren’t healing like they should; it’s tough to separate the everyday good from the profound grief she faced for so long.

Hana has “seen things nobody should’ve seen”, and we can imagine the worst of it through the thousand mile stare she carries at all times. After a random hookup leads to an embarrassing early-morning escape, the doctor begins to find comfort in the company of Sultan (Karim Saleh), an old lover who is part of her fondest memories of this place. Their meeting is a coincidence, but the old connection is undeniable.

As Hana and Sultan reconnect against the backdrop of Luxor’s ruins, there’s the sense that everything she has experienced will prove ruinous to any lasting relationship. Like the city itself, Hana is someone who is struggling to reclaim past glory, while putting on a front that everything is the same as it ever was. But those who know her best, and that would include Sultan, can see through the facade.

Durra doesn’t bog us down in endless amounts of exposition regarding Hana’s experiences. Preferring to show rather than tell, Durra leans heavily on Riseborough’s facial expressions and world-weary body language to relay Hana’s story. That proves refreshing, but also can be emotionally distant. Riseborough is captivating as ever, capturing Hana’s fragility but also the way she absently drifts between fond memories and an uncertain present. Charismatically sharing the screen with her is Saleh, a French actor I don’t think I’ve ever seen before now.

With its indie aesthetics, gradual pacing, and fairly loose narrative, Luxor isn’t going to be for everyone. But I can scarcely think of a greater selling point than spending a couple of hours with Andrea Riseborough as she experiences all that Egypt has to offer.