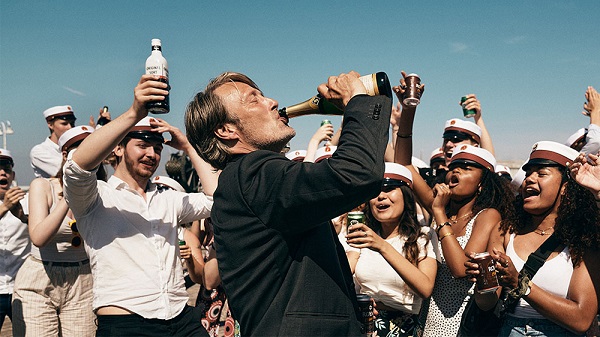 Real-life Norwegian psychiatrist Finn Skårderud has a theory that human beings are born with a blood alcohol content level that’s 0.05% too low, and that going about in their life with a little bit of a buzz produces happiness and increases creativity. So could being mildly blitzed all the time make you happy? Another Round (the film’s original Danish title was “Druk”) tries to take that idea and put it into practice for a more realistic setting.

Four friends who are teachers at a Danish high school are all going through a mid-life crisis at the same time. Martin (Mads Mikkelsen), Tommy (Thomas Bo Larsen), Peter (Lars Ranthe), and Nikolaj (Magnus Millang) are all mildly successful teachers at their local high school, but some thing’s just missing in their lives. Martin and his wife are strangers to each other after so long, Nikolaj is dealing with kids who still pee the bed. Peter and Tommy are also dealing with their own issues as well. But on one of their 40th birthdays, they all go out to dinner together, and slowly but surely, the gentlemen have a minor bender, even Tommy who first opted to be the designated driver at first. During their drunken dinner conversation, they discuss Skårderud’s theory of drinking and happiness, and decide, why the hell not?

Now, this normally sounds like the plot of a Todd Phillips or Adam Sandler movie and would have a whole bunch of drunken hijinks. However, writer Thomas Vinterberg and writer/director Tobias Lindholm decide to take the straight route. While there are moments of levity and fun, Another Round is quite serious as it goes from a film about buddies drinking to trying out an experiment, to full-blown alcoholism.

At first, the experiment seems like a success. They agree to drink only during working hours starting at 8:00 AM (and keep it hidden from the faculty and kids at their school) and everything seems fine. They are having success in life as things seem to be easier going. Martin and his wife are connecting, and he’s no longer a drone when teaching his students history. Tommy is having fun being a youth soccer coach. Nikolaj is having fun with his wife and kids (even though they still pee in the bed). Peter as a choir director is having more success getting his students to hold a tune. But like any drug, you end up spending your time chasing your high. They want to increase the BAC amount to “further the study.” Soon enough, they are binge-drinking and causing problems not only for their professional lives but for their personal ones as well. What started as just a single fun night with friends is turning them into alcoholics in real-time.

First off, Another Round is a Danish film, so get used to reading. Don’t put on any type of dub when watching it because the pathos exists best in the film’s native language. Secondly, the cast is great. While we expect Mads Mikkelsen to shine in everything he does (more on that later), the supporting cast that makes up the foursome does a great job as they all go through various changes as they continue their experiment with alcoholism. Each character gets a chance to Towards the end of the film there is a heartrending outcome that displays the dangers of the disease of alcoholism to bring everything around and the characters are forever changed. The script and direction is very tight throughout the film thanks to director Thomas Vinterberg. The true MVP of the film (of course) is Mikkelsen, who has the most to do throughout the film and gets to display the most emotion. His interaction with his wife and children went from non-existent, to connect, to distant as his drinking continues, with a very interesting outcome. Thomas Vinterberg previously worked with him on The Hunt, so it’s clear they work well together. Towards the ending of the film, there is a celebration that allows Mikkelsen to showcase his dancing skills (that I didn’t even know he had!) as there’s a celebration to the song “What A Life” that you can’t help but start singing and dancing to.

Overall, Another Round is a solid film with impressive performances that showcases the notion of managing a mid-life crisis, and how to approach your later years through reinvigorating yourself by being yourself, not booze.

Another Round is currently in theaters and will be available on VOD on December 18th.