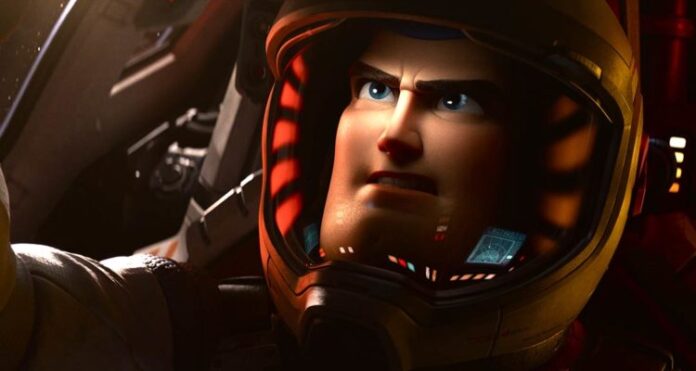 Finally, it was Pixar’s time to shine at yesterday’s Disney conference. I wish they could’ve just told us they were turning this into the next Comic-Con. Anyway, the Pixar slate is gigantic, with four new features from “fresh, new filmmakers” according to Pete Docter, who also released a brief teaser for his upcoming film Soul. We’re going to focus on the movies that Pixar has coming up, and one series tied to the beloved film, Up.

The big news of the presentation was Lightyear, a sci-fi adventure film featuring Chris Evans as the voice of Toy Story‘s resident Space Ranger, Buzz Lightyear! The film arrives on June 17th 2022, and will tell the origin story of how a test pilot became the character we know and love. Behind the camera will be Angus MacLane and produced by Galyn Susman.

Blasting into theaters June 17, 2022, Lightyear is the definitive story of the original Buzz Lightyear. Voiced by @ChrisEvans, get ready to go to “infinity and beyond” with Lightyear. 🚀 👨‍🚀 pic.twitter.com/LdYXlN33sP

Pixar also revealed new images from Luca, a coming-of-age story about friendship set in the Italian Riviera. Opening on June 18th 2021, the film centers on one young boy experiencing an unforgettable summer filled with gelato, pasta and endless scooter rides. Luca shares these adventures with his newfound best friend, but all the fun is threatened by a deeply-held secret: he is a sea monster from another world just below the water’s surface. Luca is directed by Oscar-nominated La Luna filmmaker, Enrico Casarosa.

Our next feature film is Luca. It's a celebration of the friendship between a boy named Luca and his best friend Alberto during their unforgettable summer. You won't want to miss Luca, diving into theaters June 2021.

Another film announced was Turning Red, which we had not heard about before. Directed by Oscar-winning director Domee Shi (Bao), the film introduces us to Mei, a teenage girl who transforms into a giant red panda when she gets too excited. Ummm…teenage hormones tied to shapeshifting powers? Sounds like some Teen Wolf shit, which could be cool coming from the creative folks at Pixar.

Director of the Academy Award-winning short Bao, Domee Shi, brings us Turning Red. Meet Mei: she experiences the awkwardness of being a teenager, with an added twist: when she gets too excited, she transforms into a giant red panda. Turning Red comes to theaters March 11, 2022. pic.twitter.com/oh6xaR8zRI

Pixar is also set to take us back to the world of Up, one of their most cherish films. Coming to Disney+ next fall is Dug Days, a spinoff series of short films centering on the lovable dog, Dug! Each short will take place right in Dug’s backyard and will give us a look at the world through his delightfully weird eyes. Oscar nominee and Emmy winner Bob Peterson will write and direct each episode.

An 'Up' Pixar spin-off series is coming and it's called 'DUG DAYS.' Will premiere in the fall of 2021 on Disney+ pic.twitter.com/VyOmf6hBEv

The Cars franchise is reborn! A new Disney+ series based on the hit animated trilogy will arrive in Fall 2022. Join Lightning McQueen and his best pal Mater as the take a cross-country journey full of new characters, old friends, and fun destinations.

A new 'Cars' Pixar series coming in 2022 on Disney+. pic.twitter.com/pke0qtSOnr