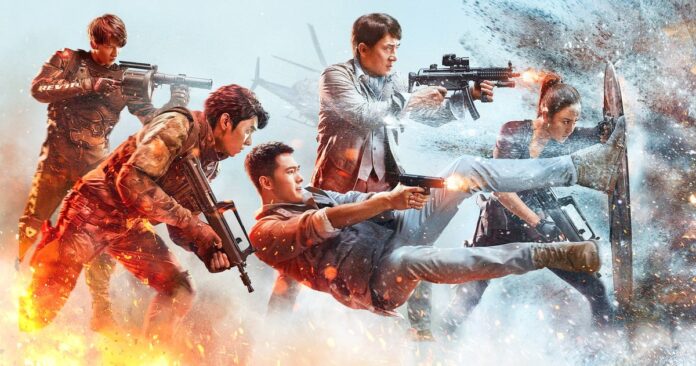 I know it’s unfair to expect Jackie Chan, at 66 years young, to be the same wildly athletic guy he was 25 years ago with Rumble in the Bronx. But as he reunites with that director, Stanley Tong, for the 7th time at least could he give us a halfway decent action movie? Unfortunately, Vanguard is Chan coasting on multiple levels, as he’s reduced to mostly-comedic supporting role in a lousy 007 knockoff with dull set pieces, unimpressive leads, and international locales with diminishing returns.

The plot is pretty ludicrous, which isn’t necessarily a bad thing. Hell, MOST of Chan’s movies are ridiculous if you really break them down, but that doesn’t stop them from working on other levels. Vanguard is too mediocre to excel…well, anywhere. Chan spends a lot of time behind a desk as Tang Huanting, head of Vanguard, a covert security team charged with protecting the world or something.  He directs his agents, Lei Zhenyu (Yang Yang) and Zhang Kaixuan (Ai Lun), in the rescue of wealthy businessman Qin Guoli (Jackson Lou) from a Spring Festival in London by a group of ornery multinational baddies.  Apparently, Qin sold out  African terrorist Omar (Eyad Hourani), who has dispatched his top henchman Broto (Brahim Achabbakhe) to take him out.

With Chan on the sidelines, his younger co-stars pick up the heavy lifting, but the shootouts are generic and the actors lack charisma, resorting to poor mimicry of Chan’s martial arts tropes. Chan gets in on the fun when the action moves to Africa, but even here he’s mostly in slapstick mode. When the bad guys target Qin’s conservationist daughter Fareeda (Xu Ruohan), Vanguard comes to the rescue to protect her from both her would-be kidnappers and poachers who don’t like her activism. As Chan slips and ducks and plays dead against a deadly CGI lion, this is a rare time Vanguard finds a good balance between the silliness and combat that the Hong Kong legend’s fans have always loved.

Mostly, Vanguard plays like a shoddy ripoff of better action movie franchises, with awful visual effects being the heaviest deadweight. Fast & Furious-style car chases wreck festivals and side streets in the mannered way a lot of these foreign action flicks do. They don’t want to totally devastate everything the way our blockbuster filmmakers are keen to. A trip to Dubai and an assault on the bad guy HQ has elements of John Wick and The Raid, but the violence is cranked down to palatable levels and very little stands out as memorable. The exception is when Tong, who also wrote the script, remembers he can also be goofy, like giving one of the Vanguard team a futuristic hoverboard contraption. Dude, why couldn’t the whole movie be this absurd?  It would be a lot more fun. A raging river-rafting sequence is an enjoyable thrill, until you watch the post-credit bloopers and realize Chan damn near died doing it.

Dialogue is atrocious and we’re given zero reason to care about Qin or Fareeda’s fates. For that matter, the entire Vanguard team lacks personality, which becomes glaringly obvious when one of them meets a potentially tragic fate and it barely registers as a blip. A potential romance feels dropped in out of necessity, and is written off just as easily. I’m one of those who will always pray at the altar of Jackie Chan’s greatness, but he’s no longer physically capable of making a bad movie watchable. And Vanguard is a bad movie, so as Chan’s output slows down let’s hope there are better projects on the horizon.