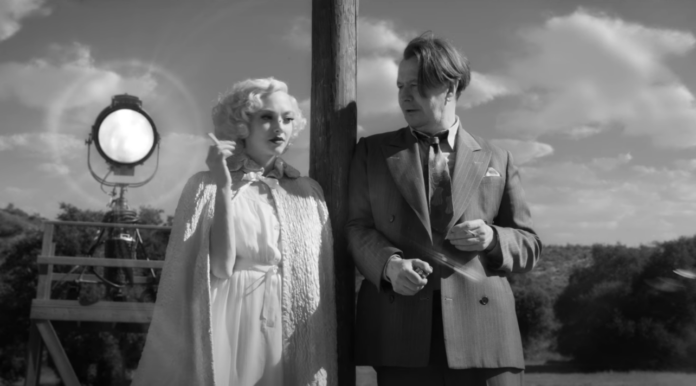 Citizen Kane is one of those films every critic is intimately familiar with. You can’t have gotten very far without tangling with it at some point, and concluding for yourself whether it’s truly one of the greatest American movies ever made. Personally, I think that’s up for debate. But the stories surrounding ‘Kane’, its impact on star-producer-director Orson Welles, boozing screenwriter Herman J. Mankiewicz, and the entire Hollywood system are legion, and perhaps more interesting than the movie itself. The challenge for David Fincher and his Netflix drama Mank is to make those stories entertaining to more than us geeky cinephiles. I’m not sure he accomplished that, but it’s a surprisingly moving, brutally funny, and entertaining re-examination of the movie business’ Golden Age of big studio dominance.

Mank might be Fincher’s most surprising film, in that it’s not spinning some idyllic fairy tale about the 1930s and the movie star era, but nor is it the blow-by-blow account of Citizen Kane’s fascinating, troubled production. It’s not even really a biopic on Mankiewicz, although it falls somewhere between that and a thriller about a hard-drinking screenwriter who uses his lethal skill to exact some form of vengeance against those he holds a grievance.

That is, ingeniously, the most alluring hook for a movie that is basically about a guy laid up in his bed knocking out a screenplay. Mank (played with tremendous flourish by Gary Oldman, ready for his Oscar), a journeyman screenwriter and script doctor who knows his way around a liquor bottle better than he does studio execs, is in his remote hideaway recovering from a freak accident. He’s been hired to bang out a script in 90-days, no 60-days, for 24-year-old wunderkind Orson Welles’ (Tom Burke) first major film. For Welles, who exists as more of a looming presence or an idea than an actual person, it’s a chance to barnstorm Hollywood and prove he’s as great as advertised. For Mank, this is his last shot at redemption, and if it is his last he’s going out with a bang.

Like many auteur films made with Netflix cash, Mank is deeply personal. Fincher’s pet project is one scripted by his late father, Jack, some decades ago. It bounces around from 1940 when Mank is hurrying through the Citizen Kane script with help from his transcriber/assistant (Lily Collins) and overseen by Welles’ twitchy producing partner John Houseman (Sam Troughton) who doesn’t think it’ll be completed. But the meat of the film is in the 1930s as flashback fills us in on everything that led Mank to writing his Oscar-winning screenplay.

Mank unfolds, quite deliberately, in a similar way to Citizen Kane, using multiple time periods to unearth the truth about a figure who is considered either misunderstood or overlooked. In the past is where Fincher relishes in the historic details, and the cinematic style at the beginning of the “Talkies” era. 1930 saw Mank use a variety of connections, some lucky some well-protected, to keep himself relevant. The most exciting of these is his tenuous relationship with publishing and studio magnate William Randolph Hearst (Charles Dance). Mank also becomes a confidante of Hearst’s controversial mistress, actress Marion Davies, played by Amanda Seyfried in one of the film’s standout parts. But Mank’s drinking, gambling, and politicizing are always a problem he just can’t shake. He has a party-killing habit of bringing up muck-raking writer and failed gubernatorial candidate Upton Sinclair, who the studio big-wigs despised. Burning bridges would be Mank’s other superpower, other than writing.

It’s the Sinclair candidacy that puts Mank in direct opposition to Heast and the other studio execs who fear the Socialist’s “End Poverty in California” campaign. Mank’s thinly veiled attempts to undercut their smear campaigns against Sinclair makes an enemy of Hearst and MGM head Louis B. Mayer (played terrifically by Arliss Howard). That Citizen Kane appears to be one long criticism of Hearst, despite Mank’s protestations, pretty much seals the writer’s fate. But at least as presented by Fincher and played by Oldman, Mank is okay being the happy warrior, striking out at his perceived enemies, standing up for his beliefs, and doing it with a smile as long as his wife Sarah (Tuppence Middleton), dubbed “Poor Sarah”, isn’t put out too much by it.

The absorbing bit about Mank is how all of these political opinions, greedy power-players, and other events coalesce to inform what would ultimately become Citizen Kane. It’s key that details of the film aren’t really discussed that much, and I think the title may have been mentioned once towards the end. Mank is absorbing so much around him and we see his demeanor evolve, become hardened, in such a way that we understand how the self-destructive workman screenwriter of 1930 became the writer of a true Hollywood classic just ten years later. The period details and the wealth of iconic figures who breeze through are endless, a real cinephile’s dream. Again, I wonder how any of this will play towards a more casual audience. Probably not at all.

Then again, maybe I’m wrong. Fincher’s script absolutely snaps with the energy and wit of an Aaron Sorkin. And like Sorkin, there are maddeningly uneven sections, and obvious areas where Fincher is more invested. Scenes between Mank and any woman in his life who isn’t Marion Davies tend to fall a little flat, and that is not a knock on Middleton or Collins who are both really good. It’s just their characters don’t amount to much, perhaps because there’s less to research than there was for Davies.  It doesn’t help that the film feels stagey and lethargic any time Mank is at the ranch. On the other hand, I was enthralled by everything regarding the studio hatred for Upton Sinclair, whose stated Socialist policies could have meant ruin for them. Mank navigates the shifting political winds like a drunken bull in a liquor store, with the expected results.  He zips between meetings with powerful figures, celebrities, and more, but never quite feels like he’s one of them.

Oldman shoots to the top of the Best Actor race with a light-hearted, but at times sobering performance that grabs you from the start. It’s amazing how much vigor he still brings to a role when it’s called for. Seyfried is also great at Davies, and I think part of it is there’s so much similarity to their careers. Davies always had a knack for comedy, proving herself alongside longtime friend Charlie Chaplin, but an attempt to turn her into a serious dramatic actress fell flat. She was perceived as being just another dumb actress but Davies was quick on her feet, fearless, and remarkably self-aware. Seyfried captures all of that, as well as the unique, snappy repartee she engages in with Mank. In terms of Davies portrayals I still favor Kirsten Dunst in The Cat’s Meow, but Seyfried deserves all of the notices she’s getting, as well.

While the use of digital photography and the widescreen aspect ratio are a contemporary drag, Fincher shoots Mank like a classic movie of the time, complete with stunning black & white by Mindhunter DP Erik Messerschmidt. Beyond that, the flashes backwards in time are presented like a page out of the screenwriter’s notebook, while archaic film reels and vintage score add to the throwback sensation.

In every way, Mank is a movie made for people who love the history of film. I would highly recommend watching Citizen Kane beforehand to get the full, rewarding experience. If that holds no interest for you, then perhaps this isn’t something that needs to be in your Netflix queue.

For decades, film historians have argued over who truly deserves credit for the Citizen Kane screenplay. While Mankiewicz and Welles are credited, and shared an Oscar win for it, some experts have surmised that it was truly the former who did most or all of the work. The legacy of ‘Kane’ would go on to hamper both men in different ways. Welles would forever have this bar that could never be reached. Mankiewicz was targeted by Hearst and didn’t have the career that he perhaps should have. If anything, Mank is a film that shows Mankiewicz’s talent and ideals (he was a Hollywood liberal before Hollywood was liberal) have lived on to finally get the appreciation they deserve.

‘Love, Death + Robots Vol. 3’ Trailer: David Fincher Gets Behind The Camera For His Animation Directorial Debut