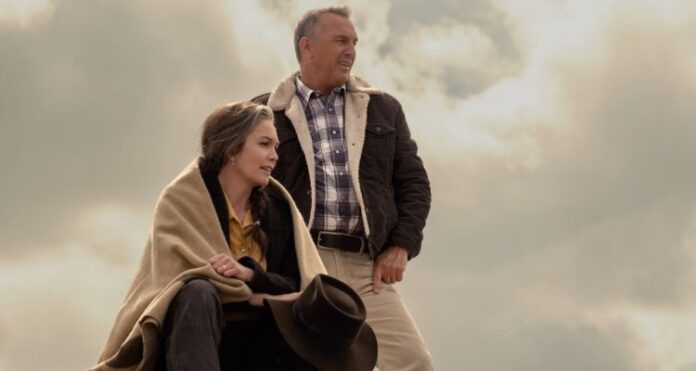 Say what you will about Man of Steel (and trust me, people have), one thing it got absolutely right was the casting of Diane Lane and Kevin Costner as Ma and Pa Kent. The two aging movie stars, both somehow more gorgeous now than at their youthful peak, came to embody the wholesome, rugged, Midwestern values that would create the world’s finest superhero. And those ideals have stuck with them, and added greater emotional heft to Let Him Go, a simple, sturdy Western in which these actors, who embody our ideal of the perfect parents, take matters into their own hands in violent fashion.

Based on a Larry Watson novel and adapted for the screen by The Family Stone director Thomas Bezucha, Let Him Go is a far-cry from that generically-enjoyable family dramedy. There is definitely plenty of family tension to be found, however, in the lives of retirees Margaret (Lane) and George (Costner). Set in 1960s Montana, the film finds the  Blackledge’s living on their horse ranch with their perfect son Ryan and his not-so-perfect wife Lorna (Kayli Carter). She’s not bad, but clearly shrinks in the presence of more dominant personalities, and Margaret is definitely that. We see a hint of Lorna’s future fecklessness early on when Margaret gently chides her for the scalding hot water about to be used on newborn son Jimmy. At the same time, George is the sort of quiet, stone-faced figure who keeps his tensions bottled up for fear of what happens if he doesn’t. A former sheriff with a nose for trouble, Geoge has settled into a life of keeping his head down and keeping his wife from stirring up hornet’s nests.

Unfortunately, tragedy strikes when a freak horse-riding accident kills Ryan, and a few years later Lorna rushes into a bad marriage with the abusive Donnie Weboy (Will Brittain), who whisks her and Jimmy away to North Dakota, where the rest of his hideous clan lives like the hillbilly version of the Corleones.

George might be the ex-lawman, whose demeanor suggests a lifetime of violent shootouts with ornery outlaws, but it’s Margaret who steals herself for a confrontation with the Weboys to reclaim Jimmy, the last connection they have to their dead son.

It’s interesting that George and Margaret, well, primarily Martha, see their grandson as having been stolen from them. George, at least, recognizes that Lorna has some agency in all of this, and she made a decision. Even if unwise, it was hers to make. That said, he’s not going to let Margaret wander into danger alone. Tough as she is, he’s her loyal bulldog and will go wherever she does.

The idea of things being “stolen” is weaved throughout with a surprising amount of subtlety and grace. If you went in expecting the next Taken-style AARP thriller, Let Him Go isn’t exactly that. There’s more on its mind, and setting the story in the turbulent 1960s, when America is in the midst of societal change, is no coincidence. George and Margaret are hard-working, salt of the Earth types, but they’re also isolated from the struggles of people different than them. And that ignorance comes to affect them in different ways. They learn a thing or two about true loss when encountering Peter (Booboo Stewart), a Native American living alone on the outskirts of town. A runaway from the Native American Boarding School who has seen his entire life, family, and even his true name stolen from him, Peter represents what this country has taken in its failed attempts at assimilation.

So the Blackledge’s hit up North Dakota looking to kick a few tires, rustle up some info on the Weboys. What they find is that everybody knows the name, but nobody wants to talk about them. They’re confronted by people with entire legacies of poverty behind them, and it’s made them hard, defensive around outsiders and protective of their own.  The Weboys are, in a way, the inverse of what the Blackledges are. They believe in family, too, but in a way that’s ugly and conniving. If what is left of the American Dream is being stolen, it’s people like the Weboys who have been taking from it for years.

And that is embodied in the character of Blanche, played with black widow venom by Lesley Manville. If the rest of the Weboy clan are a bunch of blandly villainous thugs, Blanche is the mafia queen, feigning down home pleasantries to your face, but ready with a knife to stick in your back. Manville’s performance is intentionally dialed up past the breaking point, serving as a balance to the movie’s deliberately-paced notes. Bezucha is clearly aiming for a No Country for Old Men-style of vibe, but he’s lacking the weariness and utter sense of chaos to drive that home.

That said, when shit hits the fan it makes a very big mess. While the violence stays to a minimum, it is always meaningful and disturbingly stark. In some ways this is attempting to be a neo-Western and there’s an acknowledgment of the Blackledge’s age and physical inability to go on some bloody rampage of vengeance. They are in deep water long before they ever get in the car and make that long journey to North Dakota.  That feeling of inevitable doom does loom large, mainly because of how much we come to care for Margaret and George’s love for one another, which feels lived-in and authentic. They aren’t fleshed out much beyond that, however, and attempts to explore George’s violent past through flashback only draws what little momentum there is to a halt. All that needed to be said about the Blackledges was done in the casting.

Movies such as this don’t really get made anymore, and haven’t for a very long time. In the ’80s or ’90s, this would’ve been a solid mid-level hit, perhaps bigger. In the time of pandemic these modest films are making something of a comeback, as recognizable names like Costner and Lane have value again. A low-key throwback with distinctly-different, powerhouse performances by a trio of award winners, Let Him Go is worth seeking out when safe to do so. As it’s only available in theaters now, waiting until a VOD release might be the way to go.