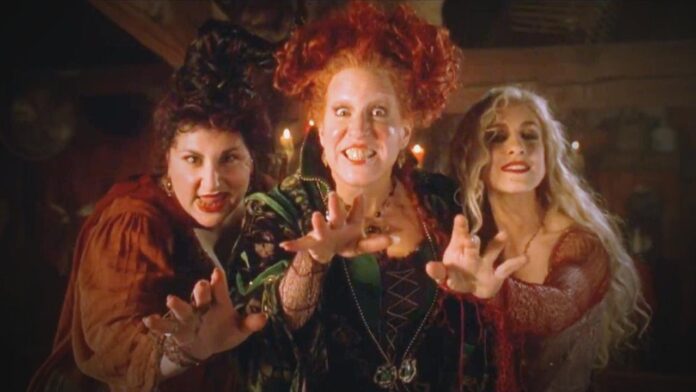 Bette Midler has delighted fans in a variety of ways over her prolific career, the most recent way being the confirmation she dropped during an interview with Fox 5 New York’s Good Day New York morning show. Midler casually confirmed that she, Sarah Jessica Parker, and Kathy Najimi, would all be returning for the announced sequel to the 90’s Halloween staple. Until about 5 years ago I don’t remember hearing all that much about Hocus Pocus but every Halloween in recent memory the Sanderson sisters start popping up all over social media with people incorporating the three into their yearly Halloween ritual. While I don’t put it in my must watch list, I do see the appeal and the Hollywood gods must have noticed as it was announced almost a year ago to the day that a sequel would be produced for Disney+. The big question mark at the time was whether or not the original cast would return, and now we know that question mark has been replaced by a big exclamation mark.

Though, I suppose we shouldn’t be too surprised as the three have already confirmed that flying on a broom is like riding a bike by way of a special live virtual event being put on by the New York Restoration Project called, In Search Of The Sanderson Sisters, which happens this Friday October 30th. If you simply don’t know if you can wait until the sequel is released you can join in at 8PM to get your fix!

I put a spell on you and now you… better get your tix for our virtual #HocusPocus Hulaween Takeover! Originally arranged for the film by musical genius @marc_shaiman, and in the top 5 most recent texts on my phone. It begs the questions…will we, won’t we, did we?  All these answers on 10/30 at 8p ET. Streamable worldwide. $10 tix benefitting @nyrp. Link in bio. #nyrphulaween

Still no word on when we can expect to see the film, in the world of COVID next Halloween seems a bit like a pipe dream but, hey…they’ve already got their costume fittings done!