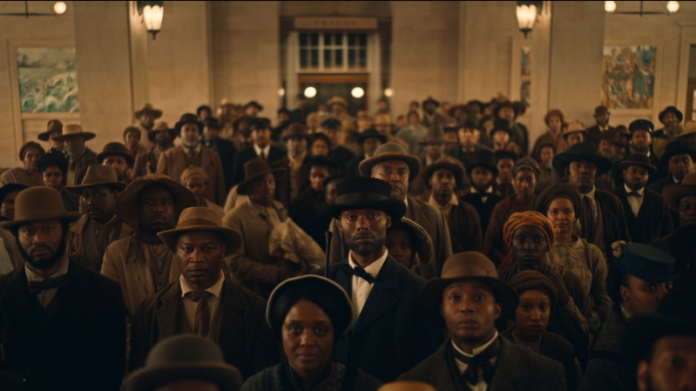 Having already proven himself with Best Picture winner Moonlight, and his acclaimed follow-up If Beale Street Could Talk, Barry Jenkins has taken on a new challenge. The moving first teaser for Jenkins’ adaptation of The Underground Railroad has arrived, bringing with it our best look at the Amazon Prime series and a listen at Nicholas Britell’s powerful score.

Based on the Pulitzer Prize-winning novel by Colson Whitehead, The Underground Railroad takes an alternate history look at the 19th-century, as two slaves attempt to flee north in a literal underground railway system. The brief 60-second teaser strikes an unforgettable opening image; black faces by the dozens, presumably those rescued by conductors in the railroad, before finally settling on the conductors themselves.

Jenkins directed all nine episodes of the series, with Whitehead as an exec-producer. Britell has composed the score for Jenkins two most recent films, and we’ve seen how those played out. No reason to think they’ll fail now.

SYNOPSIS: The limited series chronicles young Cora’s (Mbedu) journey as she makes a desperate bid for freedom in the antebellum South. After escaping her Georgia plantation for the rumored Underground Railroad, Cora discovers no mere metaphor, but an actual railroad full of engineers and conductors, and a secret network of tracks and tunnels beneath the Southern soil.