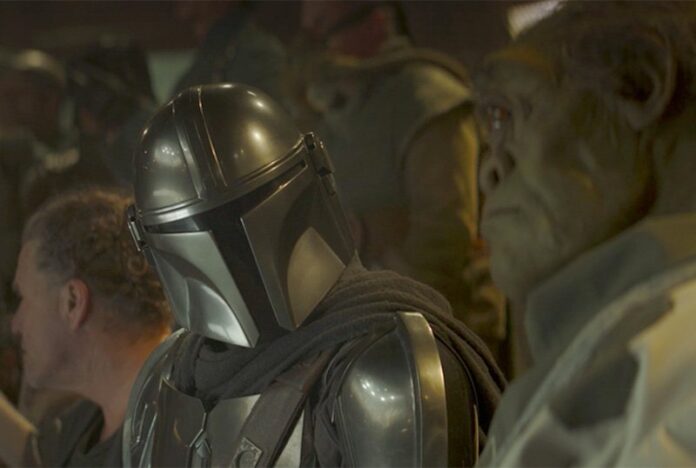 Everyone can relax. The Mandalorian has returned for season 2. It’s been a long, tough year without Mando and Baby Yoda. Some shit has gone down since. The Rise of Skywalker happened. Pretty sure that’s it? Anyway, at least in terms of Star Wars, the trials in this Lone Wolf & Cub-esque series are all we’ve got to cling to and having it back is a treat. And at least based on the first double-sized episode, showrunners Jon Favreau and Dave Filoni are more confident in where this story is going than ever.

Episode 1, or Chapter 9, of The Mandalorian will feel very familiar as it falls into the same “Mando visits a remote town, helps townsfolk defeat an overwhelming threat” motif. It’s the Seven Samurai formula, and it works here, as well, while adding an enjoyable new character that hopefully will become a regular. Does it proceed the over-arching story very far? Not really, but as we know from season 1, the advancement of Mando’s quest to reunite The Child with his kind will hit full throttle when the time is right.

Since advance screeners were not made available so as to avoid spoilers, I won’t be spoiling anything key here. The episode finds Mando, with Baby Yoda in tow, making their way back to Tatooine, but not before a violent encounter at a Gamorrean death match. It’s there that Mando learns of another Mandalorian living on Tatooine as a protector, a sheriff, even. Heading there, Mando finds something that his target is carrying something that connects him to the Mandalorian people in an unexpected way. He also gets to reconnect with a popular character from the first season, Amy Sedaris as quirky droid wrangler Peli Motto.

This episode sees the debut of Timothy Olyphant as Cobb Vanth, a character who will be very familiar to fans of Chuck Wendig’s Star Wars novels. Olyphant isn’t quite in Deadwood mode here, but maybe closer to his lawman role in FX’s Justified series.  Vanth and Mando are almost cut from the same cloth. Both live by a certain moral code and their inclination to fight usually to protect others or themselves. In this case, they strike a bargain that will put them on the menu of a deadly creature terrorizing the town.

Like many episodes from season 1, The Marshal is a standalone story and the suggestion is that most of this season will proceed that way. What’s different now is The Mandalorian can dig deeper into Star Wars lore than it could while trying to establish itself. So we see a connection to one of the most popular characters in Star Wars history make its presence felt in a way that assures future headaches. Furthermore, Favreau and Filoni are keen to show how significant events in Star Wars history, including a climactic one from Return of the Jedi, impact those who have stayed out of the fight. It’s something we saw Rian Johnson tease a little bit in The Last Jedi, but here we actually get to see what the war looked like from their perspective. More of that, please! It makes the universe feel even bigger than it already does.

This second season promises a mix of episode lengths, and this first one clocks in at nearly an hour. The 30-40 minutes of season 1 were perfect, and I felt this one stretched a little too far with a lot of padding in the middle. That said, there is some great action here, with Mando showing off his arsenal early on and a big creature battle later. The visual effects, which Disney has been making a case to document the technical wizardry, is movie quality from start to finish.

No sign of the biggest question marks surrounding this season, such as Rosario Dawson as Ahsoka Tano and Sasha Banks as whoever she is. But a bald, shadowy figure teases another who fans have been waiting for, and the payoff of that should be epic.

You already know Baby Yoda is cute as Hell, although relegated totally to childlike reaction shots this episode. They seem to be leaning more on the “baby” aspect for maximum merchandising potential, and it’ll probably work. In times of danger or extreme violence, of which there is much for him to see, the little green tyke is a comedy machine.

The success of The Mandalorian‘s second season will depend on how Favreau and Co. take this individual episodes and merge them into something greater. Callbacks to the larger Star Wars mythos accomplish that, and the more they lean into it the better.