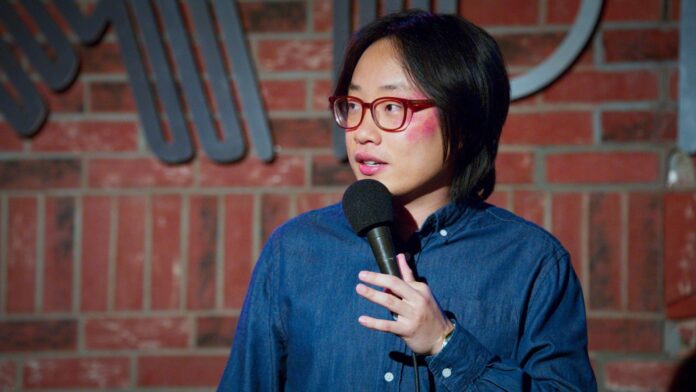 The Opening Act is an ode to standup. Like some actual odes, at times the plot seems to wander and drag-on. However, its sweetness and dedication of the director and writer oozes from the screen. Filled with your favorite comics, that visual poet, Steve Bryne, tries to capture a young stand-up’s start MCing his first paid standup gig. Filling that role is real-life standup comedian and actor Jimmy O.Yang Crazy Rich Asians, Silicon Valley, Space Force) in his first real leading role.

Will Chu (Yang), insurance salesman by day and baby standup comedian by night, wants to find success in comedy. After taking the plunge and quitting his job, he takes his first real paid gig opening and MCing a weekend show in Pennsylvania. Headlining is his idol, Billy G (Cedric the Entertainer) and Chris (SNL’s Alex Moffat), a smarmy midlevel talent. As he heads into the gig, Will has to learn whether or not his love of the artform is enough to drive him actually working towards his goal.

Bryne packs the film with talented and popular standups like Roy Wood Jr., Bill Burr, Whitney Cummings, Russell Peters, Iliza Shlesinger, Ken Jeong, and Jermaine Fowler. Each with a bit part, Byrne makes some appearances work better than others. Some of the film’s best moments are during both the opening and closing credits. The opening montage, a collection of tv clips of famous comedians before they were famous intercut with scenes from Will’s childhood watching said comedians, provides the film with some much needed emotional backbone.

Like his character, Yang doesn’t seem comfortable with the spotlight completely on him. Though there is potential there, as a leading man he feels awkward and stiff. His character’s growth feels stagnant, and though Yang does a good job conveying the anxiety and pressure on a comedian in the early stages of their career, he fails to resonate.

Cedric The Entertainer, in a fatherly mentor role, also provides a much needed emotional touchstone for the viewer. In fact, you want more Will and Billy G scenes together. Neal Brennan, the underrated comic genius who rose through the ranks with Dave Chapelle, is The Opening Act’s secret weapon. Straddling the line between straight man and comic assassin, Brennan proves his comedic chops as the club owner.

The Opening Act doesn’t really dive into what makes standup fascinating. It does focus on the grind in a way that no other standup film has, however it skims over the pain and trauma that propels most comedians into comedy. If that missing piece had been added or had even been emoted better by Yang, the payoff would have been much more fulfilling.

The Opening Act is available on-demand. Watch the trailer below.

Jimmy O. Yang Struggles To Find A Laugh In ‘The Opening Act’ Trailer