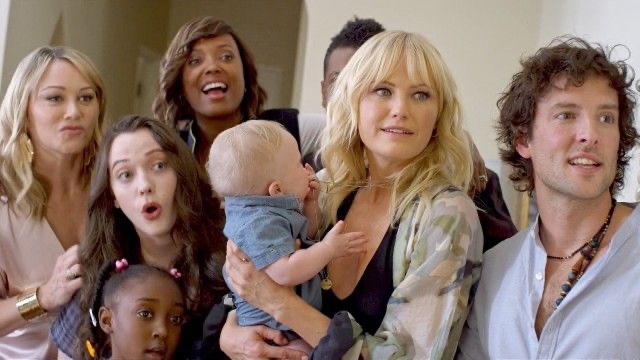 There are very few Thanksgiving movies. While Christmas films get all the glory, Thanksgiving films seem to be few an far between. Joining the ranks of Planes, Trains, and Automobiles, Pieces of April, The Oath, and Home for the Holidays is Friendsgiving, a new film centered on how many millennials prefer to spend Thanksgiving with friends, rather than with their families. This could be due to financial reasons but with political tensions so high, many young adults would rather put off interacting with their families until Christmas. First-time director/writer Nicol Paone tries her best to create a light and funny holiday comedy but Friendsgiving, like some family gatherings, comes off as tedious and annoying.

Single mother and actress Molly (Malin Akerman) is spending her first holiday with her baby and without her husband. Her best friend Abby (Kat Dennings) is supposed to come over, as she is still not over her breakup with her girlfriend. A small get-together, just the two of them, gets out of control as more and more people decide to come over including their mutual best friend Lauren, Aisha Tyler, Molly’s newest squeeze Jeff (Jack Donnelly), Molly’s mother Helen (Jane Seymour), and Molly’s ex-boyfriend (Ryan Hansen). As the day goes on, the girls realize that their pasts need to be dealt with in order to have better futures and a better Thanksgiving.

Like a lot of comedies today, there are too many characters in this film. Instead of focusing on a few with full-fledged arcs, characters pop in and out doing bits, some working better than others. Brooklyn Nine-Nine alum Chelsea Peretti is one of the most successful with this concept, as a former angry-party girl turned spiritual guru. Fortune Feimster, Wanda Sykes, and Margaret Cho come in for a one-scene cameo, causing more laughs in two minutes than in the rest of the film.

As the film’s leads, Kat Dennings is more successful in portraying her character than Akerman, comedy and emotion coming through Dennings’ performance. As the film goes on, her character’s pity party does weigh on you, but that’s more of a writing issue than a Dennings’ issue. Akerman fails to capture the emotional depth of the character, coming off unsympathetic and one dimensional more than anything else.

Friendsgiving should work in theory but its script and characterization weigh it down. Maybe it’s that we are living in 2020 and comedies about how annoying people are just don’t resonate. Paone’s script does create some wonderful moments of comedy, but those moments are few and far between. Lacking the heart that past Thanksgiving classics have, Friendsgiving will leave you hungry for a film with more substance.

You can watch Friendsgiving in theaters, on-demand and digital. Watch the trailer below.