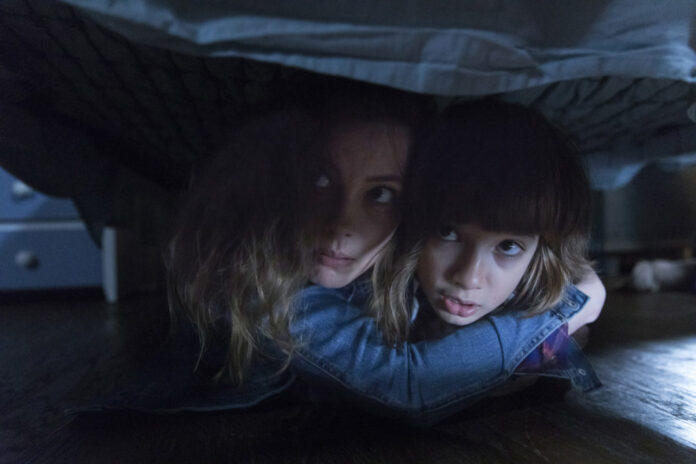 There are no shortage of films about the dangers of technology, and their propensity to consume our everyday lives. That premise is given a supernatural twist in Jacob Chase’s Come Play, an expansion of his 5-minute short Larry, a tight, spooky “imaginary friend” horror that, when expanded into feature-length, loses much of what made the original work.

Come play is focused around Oliver (Azhy Robertson), an autistic 8-year-old whose lack of communication skills have made an already stressful time much harder for his parents, Sarah (Gillian Jacobs) and Marty (John Gallagher Jr.). As they deal with their impending separation, they also butt heads over care for Oliver, with Marty positioning himself as the “fun” parent, leaving Sarah to be the disciplinarian, a role she does not welcome. For Oliver, who already has trouble making friends and is often bullied at school, his only escape is into his handy tablet, which is not only a source of entertainment but also his communication device. What his parents don’t know is that someone, or some thing, is on the other side of the screen becoming Oliver’s one and only friend.

Oliver’s loneliness makes him easy prey for Larry, a gangly, withered creature who exudes eternal isolation and sadness. Having introduced Oliver to his plight through a particularly creepy book about misunderstood monsters, Larry begins acting out through increasingly frightening and deadly means to keep the boy on his side. Most of what he does falls into the Paranormal Activity or Poltergeist realm of frights; and while this isn’t particularly dangerous when in the home, Larry’s power is carried around in Oliver’s tablet.

What Come Play posits is the threat posed by a lonely child’s need for acceptance, and how it makes them susceptible to bad influences. Chase has come up with a solid basis to explore that idea but rarely does it, perhaps feeling limited by Oliver’s lack of communicative ability, making it hard to tell the story from his perspective. The film’s most effective moments come as Oliver attempts to make new friends, or reconnect with an old one, showing how difficult it is not only for him to connect with people but for kids his age to understand what they are unfamiliar with. Come Play might have been a better film if it had focused more on the children and Larry’s nightmarish attempts to gain their friendship. One of the movie’s best scenes comes when Oliver attempts to make new friends, having them over the house for a sleepover, only to have Larry cause so damage it ends in disaster.

The reading of pages from Larry’s gloomy story bring him closer into our world, presented in moving furniture and flashing lights, but his presence can only be seen through the screen of Oliver’s device. The effect of seeing the haunting, skeletal figure in digital form is indeed chilling, but never scarier than the awful parents Oliver has to put up with. Neither Sarah or Marty appears to understand their son too much, and they don’t put a lot of effort into it, either. They selfishly battle one another over who has Oliver’s affections, all the while missing that he’s being corrupted by a demonic presence. Even when they do find out what is going on and the source, the actions they take are so absurd they’re tough to endure even by horror standards. Ultimately, neither seems to care for Oliver as much as they care about themselves. Who is the real enemy here?

Compared to raised standards of the complex horrors of recent years, Come Play feels absolutely archaic. From its presentation of the paranoia surrounding technology and even in the stereotypical way Oliver’s autism is portrayed, this is a film a step behind the times. Even the weak jump scares leave much to be desired. PG-13 doesn’t need to be a hindrance to effective horror, but Come Play fails to tap into the fear of a literal ghost in the machine.

Come Play gets a strong performance from Robertson, whose ability to depict Oliver’s feelings of rejection keep us emotionally invested. That Robinson is so good at navigating the turbulent home life Oliver endures is no surprise. Viewers watching might recognize the young actor for his role in Marriage Story, in which he stood equal opposite two heavyweight performances. Jacobs isn’t the best fit for the beleaguered mom role, however. She’s a natural at loose, funny roles but panicked mom screaming at an IPad isn’t really her bag. Her casting is just one of many misguided efforts in Come Play, which shows no reason to have been expanded in the first place.