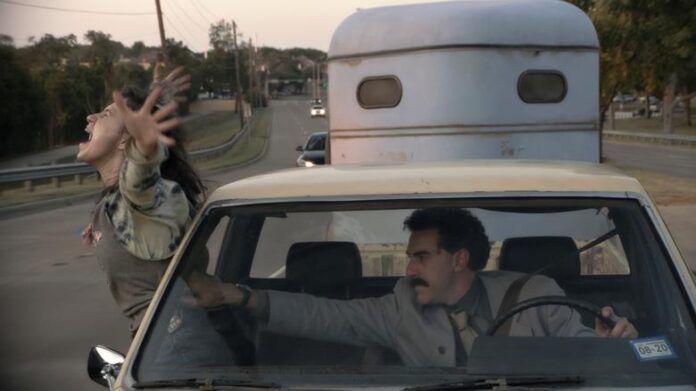 For more than two decades Sacha Baron Cohen has been pushing the boundaries of good taste as a variety of fake journalist characters, pulling pranks and setting up embarrassing situations for celebs, politicians, and regular folks to fall into. He struck gold in 2006 with Borat, with the ridiculous Kazakh interviewer becoming a global phenomenon and thus, Cohen as well. He kept up the act in small doses, but now Borat gets a proper return in Subsequent Movie Film, which is, for the most part, more of the same only flavored with Trump-ian chaos.

The first Borat film found its groundbreaking humor by peeling back the scabs of racism and prejudice, while making those who hate look like clowns. The challenge Cohen faces now is that bigotry, thanks in large part to the current administration, is now front and center. There’s no shock value in uncovering packs of racists or domestic terrorists-in-training roaming about in the wild. So while the film doesn’t pack as many surprises, Cohen finds new laughs in poking fun at just how down the white nationalism rabbit hole we’ve gone.

Subsequent Moviefilm takes into account Cohen’s immense celebrity and works into the world of Borat. The journo’s fame has turned his home country of Kazakhstan into a punchline, and he’s paying the price for it by working in a gulag. Borat’s name is so crappy it ranks below Jeffrey Epstein on the pecking order. Yes, there is lots of Epstein humor to be found; for that matter, there’s lots of Trump humored tied to Epstein and their affinity to very young girls. Offered a chance to clear his name, Borat is tasked with delivering Kazakhstan’s most famous monkey to VP Mike Pence, which is weird enough. But upon arriving in the States, Borat learns that his one non-male child Tutar (Maria Bakalova), who he never knew existed until maybe ten minutes prior, has stowed away in the cargo.  Oh, and she ate the monkey because, sure, why not. That’s hardly the grosses thing you’re going to see in Borat 2, but it may be the tamest.

Initially, Tutar seems like a character who will outlive her usefulness early. Borat can be a bit much at times, all by himself. But it turns out that adding Bakalova as Tutar was a stroke of genius. Together, they create this ass-backwards father/daughter bonding story, while allowing Cohen to explore entirely new themes. Tutar, who is influenced by a Kazakh cartoon that imagines Melania Trump as this Cinderella-esque figure (and the happiest woman on Earth!!), is a living breathing symbol of her country’s mistreatment of women, and also a mirror reflecting our own. Borat, who is worried about saving his own neck, even decides to give his daughter over to “vice pussy hound” Pence in place of the monkey.

Bakalova (who has been confused with actress Irina Nowak) takes some of the comedic pressure off of Cohen, and she proves more than capable of handling his zany, pointed brand of prank humor. Along with a bevy of disguises, Cohen is able to deploy Bakalova as a less-recognizable, disarming face. She guides Tutar through a surprisingly fulfilling arc, beginning as a cartoonishly naive Kazakh woman who believes her vagina has teeth, to one with a surprising amount of autonomy.  The path to getting there has her encountering a legitimately nice woman who fears for Tutar’s enslaved mindset; a pro-life doctor who will say literally ANYTHING to convince her against abortion; and a group of women conservatives who manage to sound less-informed than the girl who thinks females deserve to be in cages.

Borat doesn’t take second fiddle or anything, but his routine is familiar and thus has less impactful. Similar to his short-lived series Who is America, Cohen has Borat pinballing across America from the deep south to the big city of New York, encountering people we are embarrassed to admit belong to us. It just doesn’t hit as hard when Borat convinces a baker to write “Jews Will Not Replace Us” on a cake, or when he invades a white nationalist rally dressed as a rednceck and leads in a song of “Obama, whatcha gonna do? Inject him with the Wuhan Flu!”. It’s basically the same “Throw the Jew Down the Well” gag he pulled off before.

It’s during this time that Cohen, who shot the movie over the last few months, begins to incorporate the pandemic and global lockdown into the story when it hadn’t been there before. As it probably should, that real-world crisis begins to dominate the story as Borat falls in with a couple of QAnon conspiracy theorists who believe everything from the Democrats eating babies to having created the coronavirus. Cohen, who actually stayed with these two gentlemen in character for a few days, works them into the gags so perfectly they become a key part of the story. At the same time, it’s one of those perfect rebukes of the Trump era and the deplorables who follow him.

Gross-out gags remain a key part of things, as well, from a disgusting-but-hilarious fertility dance to the…*ahem* unfortunate cameo by Borat’s former producer Azamat Bagatov. But the main target for Cohen remains anti-semitism. This being 2020, his aims are a little bit different, singling out social media outlets for allowing bigotry and disinformation on their platforms. While most of the people Borat encounters are pretty awful, there’s a surprisingly heartfelt moment with Holocaust survivor Judith Dim Evans, who is actually suing Cohen right now. It’s unfortunate, because hers, along with the other genuinely good people that Borat meets along the way are what these movies are really about. As Borat unearths the scum who infect this country daily, it’s the ones who smile and try to help the clumsy, offensive, but well-meaning oaf that reminds us America isn’t all bad.

Borat Subsequent Moviefilm is a funny, reheated sequel that uses entertainment as timely activism. Cohen could conceivably do one of these after every couple of election cycles and have something new to say each time. But to me it’ll always be worth it for the peacefulness that is felt when Mike Pence or Rudy Giuliani stumble into well-deserved humiliation. Rudy’s bit is especially sordid, and the look on his face is priceless. Nothing this election season can compete.