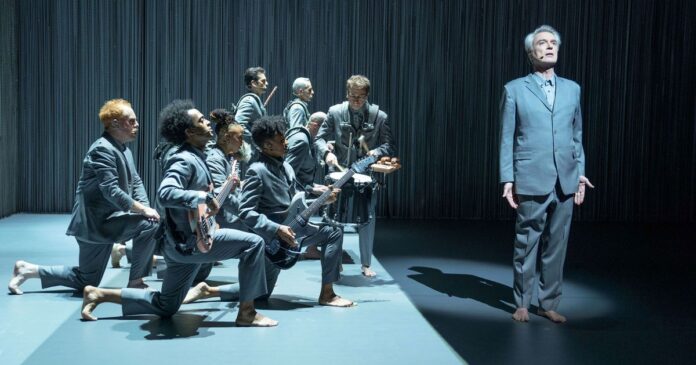 Former Talking Head’s frontman David Byrne seems to be popping up everywhere. Stealing the show in the variety special John Mulaney and The Sack Lunch Bunch last winter and appearing on SNL this past spring, the rock and roll legend clearly hasn’t felt the need to slow down. Known for the groundbreaking and legendary concert film Stop Making Sense with his former band, David Byrne is back onscreen. This time it’s with American Utopia, a Spike Lee directed film documenting his critically acclaimed Broadway show.

Based on Byrne’s 2018 solo album of the same name, the stage production of American Utopia opened on Broadway in October 2019 after touring around the country. While the show had a concert feel, Byrne uses the 100-minute show to talk about what it means to be human. With an entire band from all around the world, Byrne and his ensemble sing, dance, and stomp around the stage in synchronized formations. The stage is sparse with a scrim of metal chains hanging from the ceiling, symbolizing the millions of connections we make while we’re alive.

Clearly, everything on stage is was meticulously thought over by Byrne. At first, if unfamiliar with the singer, this can feel overwhelming, especially since the first universally recognizable song doesn’t pop up until about nine songs in. Bits of monologue and storytelling intercut the music. While a musician and performer first, Byrne’s monologues are captivating, creating some of the best bits in the entire show.

Byrne obviously infuses Talking Heads classics with some of his lesser-known songs, but the last four to five numbers really hit home the most. Taking a song from Janelle Monáe, Byrne uses his voice as a straight white male with power to speak about police brutality in America. “Hell You Talmbout” lists the names of just some of the individuals who have succumbed to racial violence. Obviously filmed before the murders of George Floyd, Breonna Taylor, and Ahmaud Arbery, Byrne uses this moment to punch into the show emotional climax. Lee does his best directing with this number, taking us away from the stage for a bit and showing us the names, family members, and photos of the victims.

In the first half of the show, Lee’s direction seems to weigh down the production. he seems lost on how film the show in its full essence. The main job when directing a performance is finding the best way to capture its full impact on film. Most likely, the show is popular and praised enough that the whole reason you are filming the show is to bring it to a wider audience. Lee does a lot right in his direction. His overhead shots and filming behind the chain curtain bring a dazzling unseen aspect to the show while still articulating what Byrne is trying to do. However, these moments are few and far between.

Lee spends too much time on closeups. The whole point of filming a stage production is to see the stage and the full effect of Byrne’s brainchild. When constantly on Byrne or one of his band members, you actively feel like you’re missing something, especially since the show is so intricately choreographed.

If you like David Byrne, are a Talking Heads fan or even want to get lost in the avant-garde for a while, this is a really great way to spend an evening. However, with Lee’s direction, American Utopia proves that some things are better left on just the stage.

American Utopia premieres on HBO on Saturday at 8 pm. Watch the trailer below.