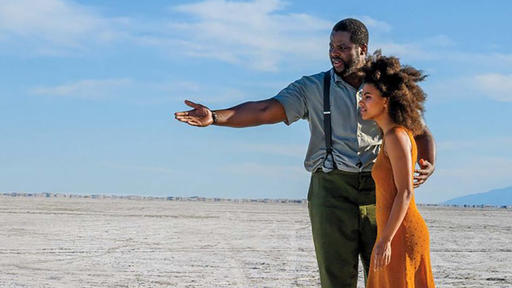 An exploration of human souls and where they come from (or pre-existence) are suddenly a very popular topic on the big screen. Pixar’s Soul will present an animated look at the metaphysical concept, while earlier this year at Sundance there was the premiere of Nine Days, a live-action drama that looks at how souls are chosen for their given subject.

Starring Us and Black Panther‘s Winston Duke, Joker‘s Zazie Beetz, plus Bill Skarsgard, Benedict Wong, Tony Hale, David Rysdahl, Geraldine Hughes, and Arianna Ortiz, the film comes from writer/director Edson Oda.  The story goes a little bit beyond simple pre-existence, as the one who determines a soul’s viability for human life is himself faced with an existential crisis.

To me this looks like something I would expect to see from Brit Marling and Zal Batmanglij, which is why it has me so intrigued. How did I miss this at Sundance?

Nine Days will be released on January 22nd 2021 by Sony Pictures Classics.

SYNOPSIS: Will (Winston Duke) spends his days in a remote outpost watching the live Point of View (POV) on TV’s of people going about their lives, until one subject perishes, leaving a vacancy for a new life on earth. Soon, several candidates — unborn souls — arrive at Will’s to undergo tests determining their fitness, facing oblivion when they are deemed unsuitable. But Will soon faces his own existential challenge in the form of free-spirited Emma (Zazie Beetz), a candidate who is not like the others, forcing him to turn within and reckon with his own tumultuous past. Fueled by unexpected power, he discovers a bold new path forward in his own life. Making his feature-film debut after a series of highly acclaimed and award-winning short films and music videos, Japanese Brazilian director Edson Oda delivers a heartfelt and meditative vision of human souls in limbo, aching to be born against unimaginable odds, yet hindered by forces beyond their will…