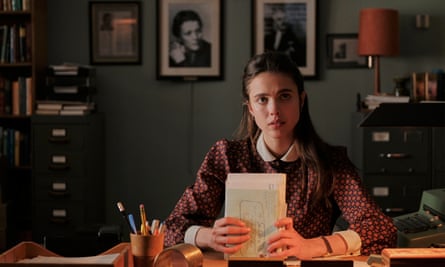 Since the finale of HBO’s The Leftovers, Margaret Qualley has been delivering one great performance after another. While Once Upon a Time in Hollywood gets most of the love, she has been just as good in Novitiate, Io, Seberg, and others. And now she’s back with My Salinger Year, a film that has already been earning strong buzz since debuting in Berlin earlier this year.

Qualley stars alongside Sigourney Weaver in the drama about an aspiring writer who takes a job answering letters to reclusive The Catcher in the Rye author J.D. Salinger. Weaver plays her vain, demanding boss who is straight out of the Devil Wears Prada playbook. The film is based on the acclaimed memoir by Joanna Rakoff.

The film was directed by Philippe Falardeau, who broke out with 2011’s Monsieur Lazhar. Also in the cast are Douglas Booth, Colm Feore, Brian F. O’Byrne, and Yanic Truesdale.

My Salinger Year has yet to gain a U.S. date but that should change very soon.

SYNOPSIS: Joanna dreams of being an author. But in 1990s New York, that is a difficult path to take. So, when she gets a job as assistant to literary agent Margaret, she is only too aware that she must seize this opportunity with both hands. She stays calm when the phones don’t stop ringing and deals confidently with her old-fashioned and stubborn boss. In any case, everything in the agency seems to revolve around just one person – the aging cult author J.D. Salinger, whose fan mail Joanna answers. While in her private life she distances herself more and more from her socialist “boyfriend”, this young woman does makes inroads towards her vocation through Salinger, of all people, who has become something of a phantom. Films that approach writing and literature and our relationship to them in a serious but moving way still exist. Based on Joanna Rakoff’s coming-of-age memoir, My Salinger Year is transformed by newcomer Margaret Qualley and film star Sigourney Weaver into a wonderful portrait of the different generations and their ambitions – and the grande dame that is literature.

‘My Salinger Year’ Trailer: Margaret Qualley Crosses The Line For A Literary Legend