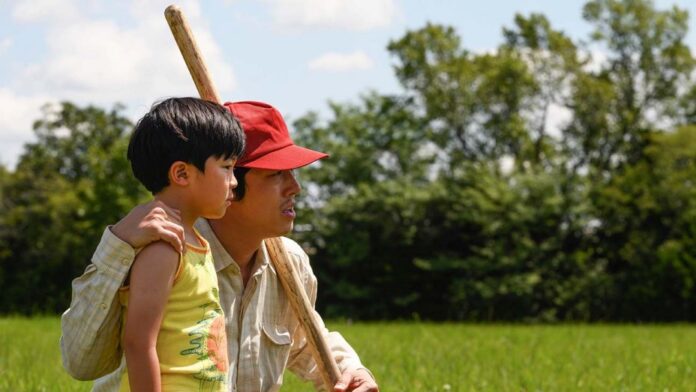 Minari. The word is foreign to most of here in America but in Korea it’s an herb, a particularly rugged one that can assimilate to virtually any kind of soil. That fits the resilient nature of the family at the heart of Lee Isaac Chung’s moving drama about a Korean family’s challenge in finding their piece of the American Dream, while learning to assimilate into an unfamiliar place. Tapping into vivid memories of his own childhood, Chung crafts an immigrant story bursting with personal touches, and yet manages to speak to something in all of us, as well.

Steven Yeun follows up his masterful performance in Burning with another, equally nuanced role as Jacob. Set in the 1980s, Jacob is patriarch of a Korean family who moves them out of California to a patch of land in the middle of nowhere in Arkansas. His wife Monica, (Yeri Han) is not impressed with the home on wheels her husband has purchased. It makes her nervous to be there, with Jacob focused on his dream of being a farmer, although he at first claims to be building a garden, as if afraid to voice what he truly wants. Monica’s concerns are legitimate; the economic strain alone will be painful, but it also puts pressure on their children David (Alan Kim) and Anne (Noel Kate Cho). David, a playful, inquisitive 7-year-old, is scolded not to run around the 5-acre plot of land. He has a potentially-fatal heart murmur, and being so far away from the nearest hospital adds to Monica’s many concerns.

Powerful and engaging, Minari is lush with the little details that make it unique among similar dramas. While the film begins like it will be Jacob’s story, it is young David whose perspective drives it most. Living off a diet of Mountain Dew (or “mountain water”) that fuels his already-energized little body, David watches his father as he strains to prove himself a success as a provider. He also butts heads with his mischievous grandma Soonja (Yuh-Jung Youn)  who comes to stay with them.

So Jacob works the fields that defeated the previous landowner. While he’s in love with the dirt’s color (Monica is again unimpressed) suggesting fertility, finding water proves difficult and buying equipment drains the family resources “Just save enough for David”, Monica warns ominously. With the help of a wacky hyper-religious neighbor (Will Patton) Jacob is a man on a single-minded mission. In the daytime, Jacob and Monica work assessing the gender of chickens, a job she works hard to maintain while he focuses all of his energy on the farm. As things grow tough, and Jacob begins to put his dreams ahead of the family, conflicts arise that threaten to tear them apart.

What works so well about Minari is how Chung balances the perspectives of Jacob and David, even as both are at times wildly divergent. The film comes alive with David’s interactions with Soonja, and they feel like Chung remembering something from his past and putting it on screen to share. He pranks the old woman constantly, including one that is pretty gross, upset that she doesn’t fit his view of what a real grandma should be. Soonja takes all of this in stride, and imparts what lessons she can on the boy. At some point, she takes him down by the lake and plants Minari, like bringing a little piece of home. With so much attention on the male characters, the women don’t get nearly as much of a fleshing out. That said, each actress makes the most of their time on screen, particularly Youn who’s Soonja becomes so integral so fast you barely notice she’s the one holding it all together.

Chung shows that these little moments of levity are just as key to uniting a family as the serious conversations that keep it grounded in reality. This is a serious-minded film but it feels more like a walk down memory lane, with all of the highs and lows that come with it. What makes Minari special is that every aspect is fully-realized, even the way their little trailer home fills up over time despite Monica’s insistence they won’t be there long. From the way Jacob leans into the cigarette he smokes, or the way grandma gets excited over pro wrestling on the TV, it’s the little embellishments that make Minari a one-of-a-kind film that only Chung could direct.