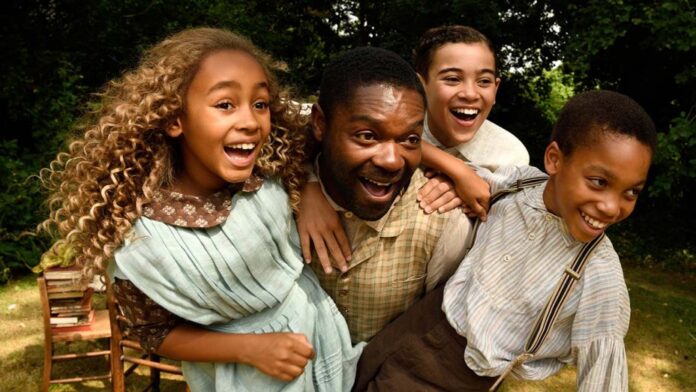 If it seems like I’m mentioning Sundance a lot lately, please forgive me. A number of the films that debuted in Park City earlier this year were delayed by the pandemic and are now arriving to make their mark on the awards season. And one of those that entered the festival with a lot of attention is Come Away, which boasts a cast led by David Oyelowo and Angelina Jolie, merges the worlds of Peter Pan and Alice in Wonderland, and is directed by Oscar-nominated Brave director Brenda Chapman.

What’s not to love?

The film presents alternate origins for Alice and Peter, reimagining them as siblings who imagine vivid and familiar-looking fantasy worlds as an escape from tragedy. Magic flows in abundance as the two are set on the path of adventure that would be chronicled in the works of Lewis Carroll and J.M. Barrie.

Chapman earned an Oscar nomination for directing Pixar’s Brave, although we can’t forget she was actually removed from that job over creative differences. She became the first woman to direct a major animated feature with 1998’s The Prince of Egypt. Come Away marks her live-action debut.

I’m going to be straight-up about it: this was the most disappointing film I saw at Sundance. While the visuals are gorgeous in the moment, they don’t change much over the course of a grim, dull story that feels like it’s 3-hours long when it’s actually just 90-minutes. If you’re going to do something inventive like merge the stories of Alice and Peter, why not have fun with it?

Perhaps others will feel different. It’s got quite a hook (and even a Hook) and a cast that’s tough to deny. Come Away hits theaters and VOD on November 13th.

SYNOPSIS: In this imaginative origin story of two of the most beloved characters in literature – Peter Pan and Alice in Wonderland – eight-year-old Alice (Keira Chansa), her mischievous brother Peter (Jordan A. Nash) and their brilliant older sibling David (Reece Yates) let their imaginations run wild one blissful summer in the English countryside. Encouraged by their parents Jack and Rose (David Oyelowo and Angelina Jolie), the kids’ make-believe tea parties, sword fights and pirate ship adventures come to an abrupt end when tragedy strikes. Peter, eager to prove himself a hero to his grief-stricken and financially-struggling parents, journeys with Alice to London, where they try to sell a treasured heirloom to the sinister pawnshop owner known as C.J. (David Gyasi). Returning home, Alice seeks temporary refuge in a wondrous rabbit hole while Peter permanently escapes reality by entering a magical realm as leader of the “Lost Boys.”