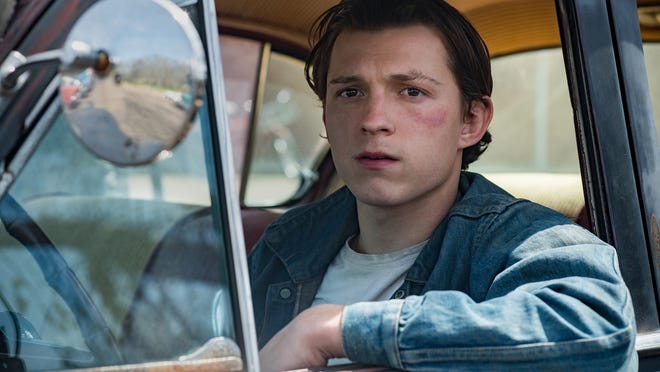 It should be an easy home run. Antonio Campos’ starry, swampy Southern gothic The Devil All the Time has so many tools the indie, used to smaller-scale explorations of filmmaker is unsure how to deploy them. Tom Holland, Robert Pattinson, Riley Keough, Eliza Scanlen, Mia Wasikowska, Bill Skarsgård, Tom Holland, Haley Bennett, Jason Clarke, Sebastian Stan, and Harry Melling are an incredible ensemble, and they’re always watchable even though Campos’ exploration of hillbilly sin and corruptible faith is ponderous and less than the sum of its parts.

Fire and brimstone preachers, serial killers, prostitutes, corrupt cops, and traumatized war vets populate Campos’ corner of Hell, colorfully named Knockemstiff, Ohio. Author William Ray Pollock’s novel skillfully connected this southern-fried Rogue’s Gallery through an endless cycle of violence, cruelty, and deceit. Campos, who directed and co-wrote the script with brother Paolo, is never able to translate Pollock’s themes or ostentatious dialogue onto a cinematic landscape. Instead, characters flit in and out haphazardly, making it difficult to engage and making the 2 1/2-hour runtime feel like 4.

There are no heroes in this sort of film, but Holland’s protagonist Arvin Russell is the closest thing to it. But even he registers as barely there. We’re introduced to him, much younger, as a boy forever-molded by tragedy. A skeletal Bill Skarsgard, as creepy as his infamous portrayal of Pennywise, plays Arvin’s war-scarred father; with Haley Bennett as the boy’s angelic but sickly mother. A terminal reliance on the word of God sends the entire family into a downward spiral, and Arvin into adulthood as a bitter, angry, and violent man. Arvin recalls the harsh retribution his father would dish out to anyone who crossed him, using it as fuel to exact similar payback to those who threaten the people he loves.

Through bland narration that explains where Campos fails to show, The Devil All the Time follows a series of broken people, too many, with most registering as barely surface level. Along with Arvin, we meet a psychopathic killer couple (Clarke and Keough) who entice boyish men into sexualized photos only to murder them for posterity. A dirty local sheriff (an unrecognizably bloated Stan) with political ambitions colludes with the criminal element. A legacy begins to form in the cruel fate of poor, naive Helen (Wasikowska), who marries a spooky-eyed pastor (Melling) who dumps poisonous spiders on his face to prove his piety to an eager parish. When his faith in God waivers, he delivers a murderous show of sacrifice.

Later, Helen’s equally innocent and lonely daughter Lenora (Scanlen) is enticed by another wolf in sheep’s clothing, pastor Preston Teagardin (Pattinson), who preaches scorched Earth tales of holy righteousness. He is, naturally, a man of immense sin, who uses his forked-tongue to demean his followers (pity Arvin’s grandmother and her chicken livers) and corrupt young women.

“To show yourself as the lord made his first children is to truly show yourself to him”, the he purrs in his pecan pie twang to Lenora in the front seat of his angel white Chevy. In short, he wants her to strip, or to be in her “birthday suit” she childishly calls it. After the deed is done, he delivers the backhand slap of God’s judgement, driving the girl to ruin.

Only Pattinson seems to get it. While the other actors capably express the film’s hanging air of depression with dour, understated performances, Pattinson’s devilish man of God is a thing of incredible irony and humor. There’s something about the way Pattinson can show up out of nowhere and steal away an entire movie, but even in the limited scenes he gets here (nobody gets their due, really) he manages to create the only character lively enough to warrant our full attention. Contemptible though he may be, at least he feels alive, unlike the others who speak with profound purpose but are dull in their profound sense of purpose.

Campos has journeyed down this path before. Through his films Afterschool, Simon Killer, and Christine he has shown with greater detail the societal and personal factors which drive people to kill. But here, those pressures are lost amidst the oppressive dialogue, dragging atmosphere, and loads of exposition. It’s not for me to say that he’s made too great of a leap too soon, but this is familiar ground Campos is walking with The Devil All the Time and yet it slips away, wriggling free like a snake from an inexperienced handler’s grip. In widening his attentions, Campos fails to get at the heart of these lost souls.