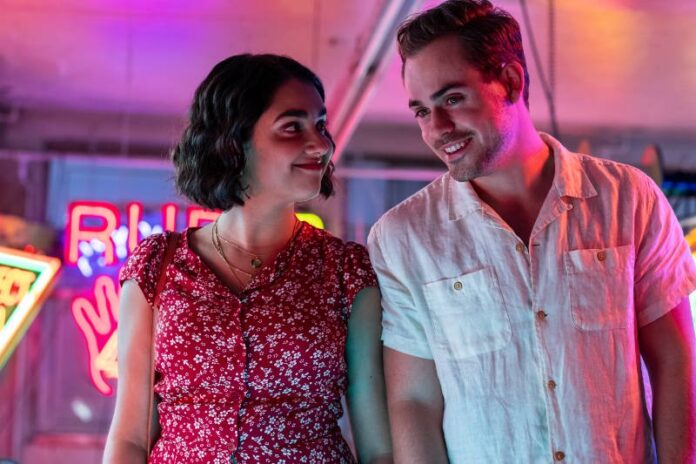 The Broken Hearts Gallery isn’t a movie that would normally blink too hard on my radar, but there’s one reason it did and one reason why it’s pretty great. Star Geraldine Viswanathan is tremendous in a plucky, vulnerable, expressive role as Lucy, a young woman who does what a lot of us do when we endure a bad break-up: she holds on to things that remind her of the relationship. It’s a common rom-com trope for the person who can’t stand to move forward in life, so they keep things as mementos. In the case of Lucy, what could be seen as a severe case of emotional stagnation is full of charm, wit, and spirit.

A breakout star of the racy teen comedy Blockers, Viswanathan is perfectly-cast as Lucy, an offbeat, hopelessly romantic New York City art gallery assistant with big dreams.  She’s a familiar character in a lot of ways, there are certainly no shortage of movies about lovelorn New Yorkers with a creative spirit, but played by Viswanthan she becomes someone wholly new. Yes, some of it does have to do with seeing a person of color in such an archetypal role. Geraldine’s father is of Indian descent, her mother from Switzerland. The Australian-born actress has an energy all her own, which makes it easy for us to fall for Lucy and her numerous romantic mishaps.

Lucy’s hope of opening her own art gallery gets derailed after a drunken incident at a company event to introduce her older boyfriend Max (Utkarsh Ambudkar, because he seems to show up in every quirky rom-com lately), who has a very different sort of agenda, one that furthers his career at her expense. She loses her job and her relationship all in the same night, and begins to do what she does best: wallowing in her depressing trinkets of past loves. Her best friends, the vintage chic Nadine (Phillipa Soo) and weirdo Amanda (Molly Gordon), convince Lucy to stop hoarding and to get rid of her junk, once and for all.

So how does one dump a lifetime’s worth of emotional baggage in physical form? That’s where Nick (Stranger Things‘ Dacre Montgomery) comes in. Meet cutes abound with these two. Lucy ran into Nick on her drunken escapade by mistaking his car for a rideshare. They keep bumping into one another, and every time Lucy unloads her burdens onto him, which he accepts with a mixture of terror and genuine concern. When they finally start to have a real conversation, it’s clear they have more in common than expected. He’s a dreamer in his own right, and his thrown everything into the construction of the Chloe Hotel. It soon becomes a place where Lucy displays items from other broken-hearted individuals, looking to unburden themselves the way she has.

Marking the debut of writer/director Natalie Krinsky, The Broken Hearts Gallery‘s greatest strength, other than its diverse cast, is the value it places on sincerity. What makes Lucy such an easy character to adore is that she isn’t afraid to be open with others, to share when she’s in a moment of pain, and to make it clear what her feelings are towards them. Yeah, she’s also a bit rough around the edges, but Lucy makes no apologies for it. She embraces it. While the men in her past may look at her as an exciting diversion, Lucy is the real deal for anybody who takes the time to notice. Surprisingly, given his bad boy role on Stranger Things, Montgomery is about as sweet and kind as it gets as Nick, and yet he’s never the bland, milquetoast dude that populates too many similar rom-coms. This despite a final act attempt to try, giving him a previously-unseen musical talent that provides a well-timed “Aw shucks” moment, and a backstory this side of sappy.

It’s refreshing to see Lucy and Nick slowly grow closer, not because of lame sitcom hijinks (although there’s some of that), but through shared purpose, a lot of alcohol, and the occasional karayoke night. There’s no denying their inevitability, but the journey to getting there is tremendously fun, and develops naturally as they get to know one another. They learn about each other at the same time we do, an effect that hasn’t happened too often outside of Richard Linklater’s Before Sunrise movies.

While undeniably formulaic at times, The Broken Hearts Gallery pulls from one of the great all-time rom-coms, When Harry Met Sally, for a bit of inspiration. Splitting up the narrative are individual stories of past break-ups, some told in documentary-style interviews by friends of Lucy and Nick’s, but also strangers who have ventured into the gallery. These tales help breathe life into the film and make it feel bigger, bringing to realization everything that Lucy is working towards.

A broken heart has been fuel for creative passions since the beginning of time, but it’s rewarding to have a film that expresses it in the helping of others. The Broken Hearts Gallery may not be reinventing the genre, but this is one break-up story that ends on a hopeful note, and will leave you happier than when it started.