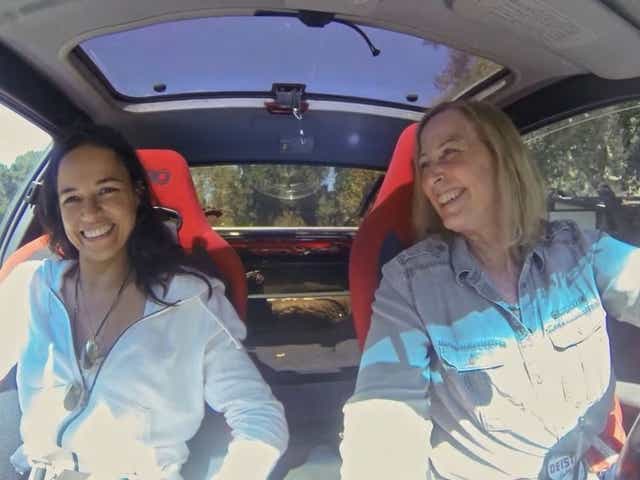 While the Academy of Motion Pictures has made recent changes in categories and requirements to win an Oscar, it has received ample criticism for its exclusion of stuntwork from its categories. Often the unsung heroes of the film and television world, stunt people are some of the hardest working and dedicated folks in the business, and like most businesses, it’s even harder to be successful if you are a woman. In her new documentary, Stuntwomen: The Untold Hollywood Story, April Wright offers us a closer look into the work, danger, and strides women in the industry have faced in Hollywood.

Mainly told through interviews and archival footage, Stuntwomen obviously focuses and heavily features stuntwomen, but also utilizes historians and Hollywood directors and producers to emphasize the work these women do. Directors Paul Feig (Bridesmaids, Ghostbusters, The Heat), Paul Verhoeven (RoboCop, Total Recall), and Anne Fletcher (Dumplin’, Hot Pursuit) share their experience and appreciation for the risk these women take every time they do their jobs. We see how stunt performers run while on fire, how they train, how driving stunts are completely different than physical stunts, how they work together, and look out for each other. We discover what a stunt coordinator is and exactly how they do their job.

While we really do get an inside look, the best part of the documentary is the conversations between the younger, currently working group of stuntwomen and the older more established generation that started it all. These conversations feature legends in the field like Jeannie Epper who was Linda Carter’s double in the Wonder Woman tv show to Melissa R. Stubbe, who with 200+ IMDb credits to her name and worked on Inception and The X-Files. Jadie David, who was Pam Grier’s double for many years, talks about how race and gender impacted stunt work. The documentary really tries to cover the entire history of its subjects in a way never seen before.

While Stuntwomen is clearly a low budget documentary, it has a huge amount of passion for its source material. Love and admiration for the work these women do oozes off the screen. At times it does teeter into a bit of “inside baseball territory,” so going in with a little knowledge about stunt work and its history might be beneficial. Appropriately its pacing is very fast, which leaves its audience with a bit of whiplash. Topics are touched upon, never really amplified. With only a short 85 minute runtime, I could have easily listened to stunt stories another 30 minutes. It does feel less jaunty two-thirds of the way through, but overall, it struggles to find its footing early on in its runtime.

Overflowing with girl power and badassery, Stuntwomen: The Untold Hollywood Storyreally tries to do these women justice for their impact on the film industry as a whole. While rushed, the film proves that the same amount of hard work and dedication is required to perform stunts as it does to act. They just jump off buildings and beat up bad guys in heels instead of crying on cue.

Stuntwomen: The Untold Hollywood Story is available for purchase on AppleTV, Amazon, VUDU, GooglePlay, hoopla, Fandango Now, Comcast Xfinity, Spectrum, Cox, and Charter. You can watch the trailer below.