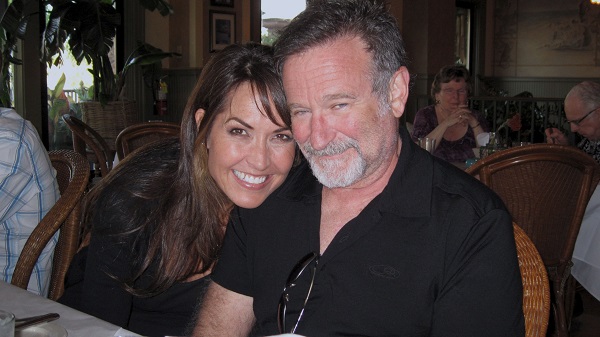 When news of comedian Robin Williams’ suicide broke in August 2014, the whole world seems to stop and collectively mourn (much like many currently are doing currently with Chadwick Boseman) and wonder, why did Robin commit suicide. The news media initially ran with all sorts of reports speculating his previous substance abuse, depression, and all other assumptions. He was painted almost like a “sad clown,” someone who could bring joy to the world, but not be able to make himself happy. Only in the aftermath of his death did we learn that he was diagnosed with the degenerative disease known as Lewy body dementia. But even now, little is really known about the disease and how it affected Robin. Director Tylor Norwood working with his widow Susan Schneider Williams deeply explore both his legacy as one of the comedy gods and as well as shed a light on Lewy body dementia in Robin’s Wish.

As stated, Lewy body dementia is still a relatively new phenomenon and is often misdiagnosed as it shares similarities of Parkinson’s disease. Symptoms include anxiety, insomnia, behavioral changes, motor skill changes, and a wide variety of other indicators. Because it’s not easy to detect, its effects can be very traumatic for those that are dealing with it, and Robin’s Wish holds your hand to help you understand what Robin, and everyone around him was going through in the last few years of his life. In the aftermath of his death, his widow Susan learns about it via an autopsy and begins a journey to learn about Lewy body dementia.

Robin’s Wish navigates a delicate fine line of being an informative documentary about the disease as well as highlight the famed comedian and his effect on the world through his brilliant use of comedy to entertain the masses. In addition to interviewing his widow, close friends in the comedy world, his neighbors, and countless others reflect on their personal interactions with him. Everything from him being Cristopher Reeve’s roommate at Julliard, to the fact that he would come by the local comedy club in his home of Paradise City and perform impromptu improv sets until late hours of the night. And of course, Williams was heavily active in the USO, entertaining soldiers overseas, and would spend hours personally talking with wounded soldiers at their hospital beds to cheer them up. The documentary lets you understand who he was from the people so deeply involved in his personal life and get to know him a little deeper.

Through first-hand accounts by friends and colleagues like David E. Kelley (who worked with Williams on the TV show The Crazy Ones) and Shawl Levy (who directed Williams in the Night At The Museum films) also describe how things slowly started to turn for the worse. Williams would forget lines, try to hide motor function loss, and be depressed that he seems to feel himself unraveling but was unable to do anything about it. It’s very refreshing that for TV shows and movies with casts and crews of hundreds of people, not one person would spill the beans to the tabloids that Williams was having somewhat noticeable cognitive issues and respected his privacy. Of course, many reflected with a sense of guilt, feeling as though there should have been something that they could have done, but unfortunately with this disease, there’s little one can do.

Robin’s Wish is incredibly informative as I was one of the people who did not know that Williams suffered from the disease in the last few years of his life. In addition to discussing Williams as an entertainer, the documentary enlists various doctors (who they have as consulting producers of the film as well) to provide a clinical approach to Lewy body dementia to inform the public of exactly what the disease is and how it impacts the brain. Friends recall that Williams felt he needed to “reboot” his brain, and doctors them explain how the brain often acts like a computer and a disease like Lewy body dementia basically fries the circuits in your brain. The first-hand accounts of his wife prove to be insightful as well as a terrifying experience to have to deal with. The only complaint about the technical approach to explaining details of the disease is that a few times during Robin’s Wish a doctor would give a strange “Ted Talk” to an empty dark lecture hall. While this is an aesthetic chosen by director Tylor Norwood, it proves to be a little distracting.

Robin’s Wish is a moving tribute to one of the greatest comedians of all time. And although Williams has been dead for 6 years, Robin’s Wish helps provide valuable context for his tragic situation and helps inform the public about such a devastating disease. Susan Schneider Williams specifically chose the title of the documentary to be called “Robin’s Wish,” it was for people to “be less afraid,” which is something Robin Williams deeply valued.