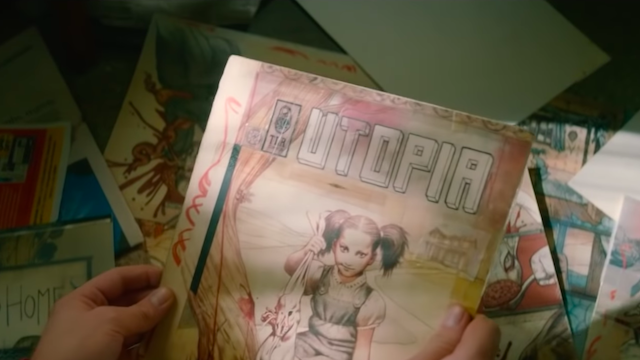 What happens when the events depicted in an underground comic book become a reality? I’m not talking about a superhero leaping from its pages to fight crime in the real world, but if that comic’s predictions of the future turn out to be true? That’s the premise of Utopia, a new Amazon series from Gone Girl and Sharp Objects author Gillian Flynn.

Based on the original UK series, Utopia centers on a group of misfit comic book readers (Are there any other kind?) who discover that predictions made in their favorite graphic novel’s pages are coming true. And that means the world is due for an apocalyptic end.

The series stars Sasha Lane, John Cusack, Rainn Wilson, Ashleigh LaThrop, Dan Byrd, Jessica Rothe, Desmin Borges, and  Javon Walton. David Fincher had been involved with the series when it was initially set up at HBO, with plans for him to direct. But when the network basically ended all dealings with Fincher, he left and Amazon swooped in. They ordered all nine episodes to series and set Utopia for release on September 25th.

SYNOPSIS: When the conspiracy in the elusive comic Utopia is real, a group of young fans come together to embark on a high-stakes twisted adventure to use what they uncover to save themselves, each other, and ultimately humanity.