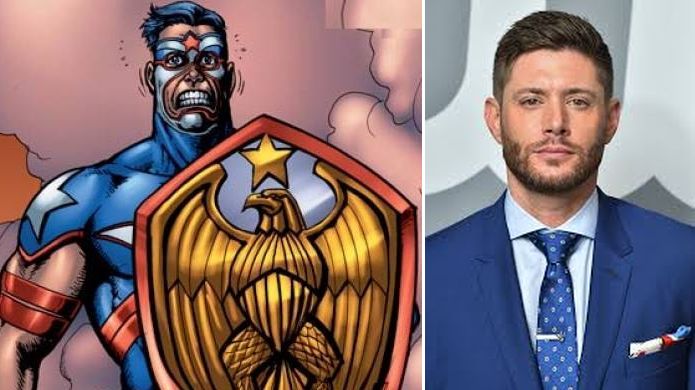 It’s a running gag on all of our assorted podcasts that I’m a die-hard fanboy for Supernatural. I’m not ashamed, the show is SO much fun and endlessly rewatchable. Most of the credit for the shows success is due to it’s leads, Jared Padalecki (who’s tapped to play Walker in the Walker, Texas Ranger reboot) and Jensen Ackles. I’ve been on team Ackles for a LONG time, the guy is old-school cool and the fact that he’s not an A-lister baffles me. He was in the running for Batman, Captain America, and I’m sure a laundry list of other iconic roles. I’d be lying if I didn’t say I was a little disappointed that the role he finallly decided to play was that of Soldier Boy, leader of the superhero group  Payback in the Amazon series The Boys. Now, I only say disappointed because, if you’ve read the graphic novels the show is based on, Soldier Boy is less then…that’s it, he’s just less then. A fake-me-out Cap who shouts the names of US States while fighting and, literally, ends up pissing himself at one point. The saving grace here is that Ackles has extremely solid comedy chops and will no doubt knock this out of the park. If you have any doubt about that just check out his Instagram post announcing his casting. Big things are coming for this guy, I have no doubt there.

I keep wondering what I’ll do….when @cw_supernatural finally ends this year. Then it hit me. *volume ⬆️

It’s going to be a while until I’m proven right on this, The Boys season 2 premier is still a few weeks away on September 4th, 2020, so we’re at least a year from seeing what Jensen can do. I’ll prepare to take all the flak the PDC can throw at me for my love of all things Winchester until that time.