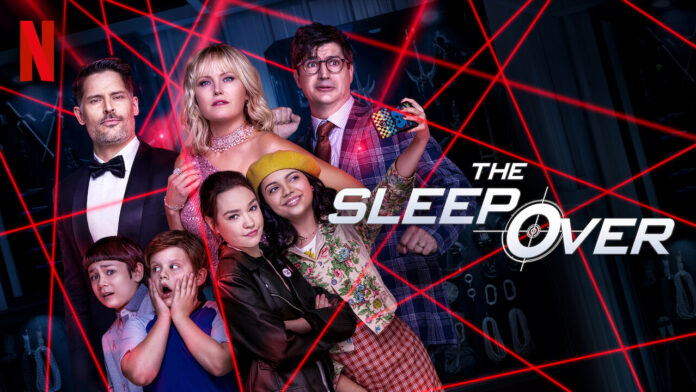 I’ve said it before and I’ve said it again, Netflix has come through to save an entire segment of film that just wasn’t getting produced anymore. Big studio theatrical production has narrowed immensely since 2010, with mostly only blockbusters, or movies based on some other IP with a built-in audience getting the green light. The neglected group includes pretty much any movie that costs between $5-$45 million to make. I’m talking about all of your shoot ‘em up action movies, rom-com’s, irreverent comedies and, in today’s example, the silly family comedy. The Sleepover, directed by Trish Sie, feels like a throw-back to the good old 80’s. Siblings Kevin and Clancy think their parents are just like any mom and dad, boring. So it’s a bit of a shock when Kevin’s sleepover with his good buddy Lewis takes a detour after their Mom Margot (Malin Akerman) and dad Glen (Ken Marino) are abducted. It’s not long before they find out that their mom wasn’t always a mom, she was a top-tier thief and their dad…well, there dad actually is just a dad. As you can tell from the synopsis, it fits right in with any of the standard 80’s family type comedies, think Adventures in Babysitting.

To keep with that comparison to the 80s, the flick isn’t amazing but it does it’s job well. There’s a pretty standard plot, with an all too easy to guess twist, but I’d be lying if I didn’t say I had fun with it. Ken Marino is really an under-appreciated comedic talent, just watching him play a suburban pastry chef dad trying to still seem like a “real man” next to Joe Manganiello is worth the 90 minutes. Malin Akerman, while being the central plot point, isn’t really given a ton to do but produces with the bit she was given. I have to be honest, she was pretty damn impressive in her fight scenes. Now, this next part I’m going to feel bad about but it has to be said…. they went overboard with the annoying little brother trope. Maxwell Simkins, who plays Kevin, the younger sibling does a perfectly fine job with the role but there are times that you will be annoyed. It’s fairly obvious what they were going for, but went a bit too far and ended up past cute little rascal and ended up at annoying. One thing is for sure Trish Sie, who’s known for directing Pitch Perfect 3 and Step Up All In knows how to get her money’s worth out of the camera. The film just looks great. Every location and set is completely different and shot in just the right way, from a suburban backyard, to an abandon subway station, the look was nailed. You can also tell she took notes from her previous directing gigs, as the fight scenes are totally legit, on the same level you’d expect from a standard action movie…. just with less blood. Fighting, after all, is just a violent dance.

There’s definitely a particular audience for this movie. If you find yourself on the couch most Friday/Saturday nights with kids anywhere around you…then get the popcorn popping, you’ll enjoy the time you spend with The Sleepover. For everyone else, it’s really a case by case, I can’t even recommend this on that nostalgia feel based on the 80s comparisons I’ve been so fond of through this review. It’s reminiscent of those storylines, but doesn’t feel like it came from that time. At the end of the day, it’s on Netflix…so give it a shot.