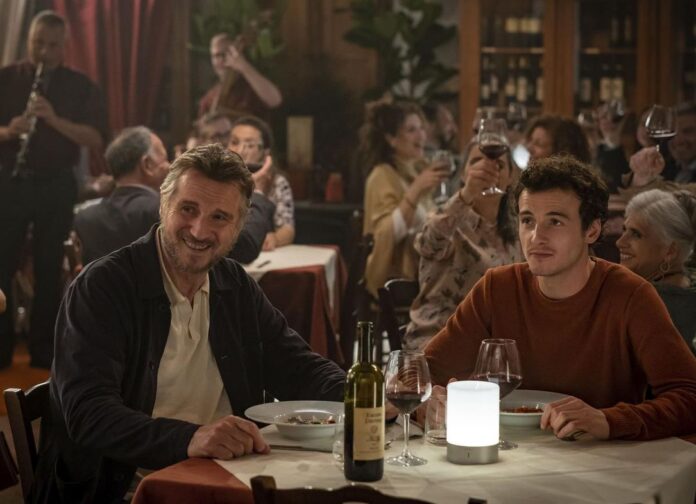 Liam Neeson. Made in Italy. It’s too much to hope this lite father/son drama is actually an undercover Taken spinoff with Neeson taking on the Mafia. Rather, the directorial debut by actor James D’arcy is a soft, predictable Tuscan melodrama about family bonding over past tragedies, undercooked like bad pasta and half as flavorful.

Made in Italy is similar to the pre-Star Wars dramas Neeson used to traffic in, back when he was known for kinder, gentler roles. He scrapped that persona to play everyone’s favorite badass Irish grandpa for a stretch, but has again settled back into a comfortable groove, albeit a bit rougher around the edges. Before we even meet his character, reclusive artist Robert Foster, he’s already been referred to as a “prick”. He then backs up this assertion by forgetting the name of his one-night-stand, and being unprepared to jet off on a roadtrip with his estranged son Jack, played by Neeson’s real-life son Micheál Richardson.

It’s Richardson who is meant to be the showcase here, as the plot largely revolves around Jack, his impending divorce, and need of a quick cash infusion to buy the art gallery he once shared with his soon-to-be ex. So he convinces that guy who was a prick five minutes ago to sell the rustic family villa in Italy, a place full of happier memories of a life before Jack’s mother tragically died.

Of course, the place is a dump and needs to be patched up, just as Robert and Jack’s relationship could use a bit of plaster and paint. Yeah, it’s one of those movies. D’arcy, who also wrote the script, isn’t going for a deep dive here. He’s going for big swing, Hallmark Channel feels. The rundown villa even includes a hideous Pollack-esque painting Jack splashed together in the heat of his grief. Something might need to be done about that.

On the plus side, Made in Italy has the picturesque, glistening beauty of a travelogue, which makes it always pleasant to look at. The film fits neatly into the same vibrant, postcard-quality camp as Under the Tuscan Sun and A Good Year. The Italian countryside, with all of its rustic charms, sun-kissed hills, and delectable cuisine, makes for a welcome place for well-to-do middle-agers to get their shit together. Although, to be fair, all of these movies have started to blend together for me, and the cinematography, while gorgeous, lacks personality.

While Neeson is reliably shaggy as Jack, Richardson doesn’t seem quite right for the role. Obviously, he’s believable as Neeson’s son, but Richardson is just too young to play someone so beaten down by life. He’s mismatched with co-star Valeria Bilello, who plays the film’s inevitable love interest, Nancy, a mother also intimately familiar with divorce. The only other female role of note belongs to the always-welcome Lindsay Duncan, who provides some needed humor as Kate, an ex-pat, also with her share of marital issues, whose tasked with trying to put the disheveled home on the market. She doesn’t get a lot to do other than hover around looking pained, but any amount of humor is a plus for a movie that is more melancholic than the setting would suggest.

Made in Italy is rooted in tragedy, one that steers uncomfortably close to reality for the father and son duo. Neeson’s late wife Natasha Richardson passed away suddenly and tragically, leaving her husband behind with their son. You could go the entire movie and not really think about the parallels, but it does cast a gloomy shadow if you do. One can only hope that wallowing in such a syrupy story of emotional healing was fulfilling for the cast, even if it leaves the rest of us hungry for something more substantial.