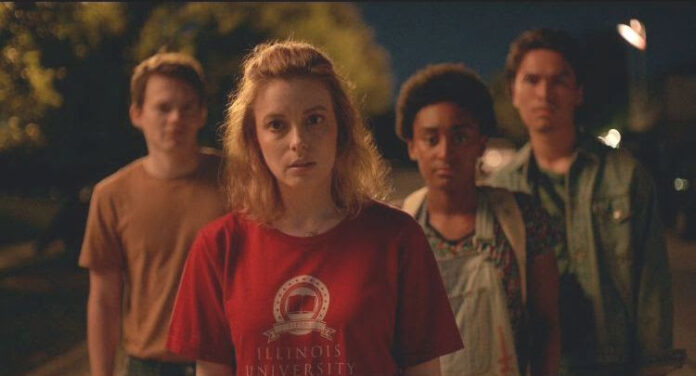 Unmet expectations seem to be a cultural theme in 2020, especially considering we’re in the middle of a pandemic. In I Used To Go Here, writer and director Kris Rey, takes that theme and grounds it in the personal and professional failings of a writer. Though life seems to intimate art, with the film’s shortcomings reflecting the character’s own book, Rey still manages to make something applicable to our own lives in I Used to Go Here.

Gillian Jacobs plays Kate, an optimistic but insecure writer who just published her first novel and is dealing with a broken engagement. Book sales aren’t going well and she is struggling to come to terms with the fact that her book may be a failure. Luckily her former professor and crush, David Kirkpatrick (Jemaine Clement), invites her up to her alma mater for the weekend to give a book talk and meet with some young writers. There, she is not only confronted with her present failures but, through current students, she must face the unmet expectations of her college self.

This is Kris Rey’s fourth film and you can tell that she feels comfortable enough to play around more than with her other films. This manifests its self with vibrant supporting characters but also with the script. While taking risks, however, the dialogue often swings and misses in the beginning, occasionally feeling like a student film.

This awkwardness of the script that adds to the unevenness of some of the performances, making you very aware that you are watching two people act. Feeling stale and amateurish, this performance/dialogue combo is hard to shake the rest for the film. Unfortunately, this mainly happens with Jacobs’ performance earlier on in the film. However, when the story gets into some emotional depth, Jacobs knows exactly what to do and gives a compelling and refreshingly honest take on failing adulthood. 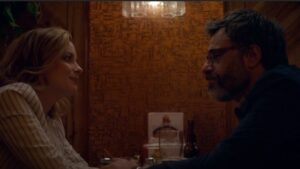 Though the role seems on-brand for Clement, his Professor is the exact right amount of pretension, creep, and charming that you want a character like that to be. His performance is one of a few that redeems the film when it feels off, including Kate’s pregnant best friend, Laura, played by Zoë Chao, a performer that is slowly giving Judy Greer, that one actress who plays the best friend in every female-centered comedy, a run for her money. However, it’s the student, writer, and current resident of Kate’s old house played by Brandon Daley that takes the cake. Daley is a tall, dorky looking young man, aptly name Tall Brandon, that gives off slight Cousin Greg from Succession vibes. Daley steals the entire film, providing his should be forgotten character with enough unsaid backstory, mystery, and feeling for his own film. His comebacks are quippy and yet he still feels weird and sweet at the same time.

It’s slightly ironic that a film about unmet expectations didn’t meet my expectations. With Jacobs, Rey, and Clement’s names on the poster, I expected something more put together and even. Despite this, Rey’s intention and sincerity do seep through I Used To Go Here, creating some bits and bobs that are worth watching.

You can watch I Used to Go Here now on on-demand and streaming. Catch the trailer below.