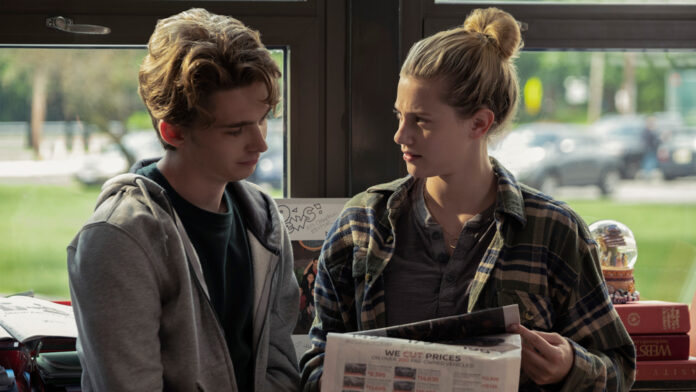 In 2005, film critic Nathan Rabin officially coined the term “Manic Pixie Dream Girl,” a film archetype describing a female character that “exists solely in the fevered imaginations of sensitive writer-directors to teach broodingly soulful young men to embrace life and its infinite mysteries and adventures.” While I’d like to think that female characters have developed passed existing to teach the male protagonist to “live,” I’d like to point out a new archetype I’m seeing sprout out of the Manic Pixie Dream Girl. Instead of a girl existing purely to teach the male character how to let loose and “be”, I’m seeing characters that are there to teach the male heartbreak and try to be fixed. Depressing girls with tragic backstories, looking for respite from everyday teen life, getting caught up in romance with someone who goes out of their way to try to fix them. Instead of a hero learning how to live through the heroine’s quirks, we’re seeing the hero learning to live through the heroine’s tragedy and pain. Nowhere is this idea more present than in Chemical Hearts, writer/director Richard Tanne’s newest depiction of young love since Southside With You. Besed on Our Chemical Hearts by Krystal Sutherland, the muted and weighty Chemical Hearts takes the drama and seriousness you feel as a teenager and completely sucks the fun out of it, making it seem like tragic young love is the only thing you get out of that time.

One day, senior Henry Page (Austin Abrams, Scary Stories To Tell In The Dark) is pulled into his advisor’s office and told that he will be sharing the Lit mag’s editor-in-chief position with a new girl, Grace Town (Lili Reinhart, Riverdale, Hustlers). She’s moody and mysterious and walks with a limp. Henry is intrigued and though she tries to push him away, the more he learns about Grace the more he wants to be closer to her. Of course, Grace is dealing with her own painful past, a car accident that impaired her mobility and took the life of her boyfriend. Despite this, Henry tries his hardest to open her up, the two getting closer in the process.

Austin Abrams has been bouncing from supporting part to supporting part for the last couple of years now, playing Ben Stiller’s son in Brad’s Status and Nat Wolff’s best friend in Paper Towns. Last summer, he played the rejected but sweet Ethan in the highly acclaimed drama Euphoria. What Chemical Hearts tries and fails to do, taking teens and making them seem like fully-fledged individuals while exploring a rarely depicted side of their lives, Euphoria succeeds in. In both projects, Abrams takes what he is given and squeezes what he can from it. His Henry is engaging and empathetic, even if the script sometimes hinders his ability to do so.

Lili Reinhart is best known for her portrayal as Betty Cooper on Riverdale, the once-promising teen soap that has since jumped the shark. On Chemical Hearts, she jumps into the producer’s chair, desperately in need of a win if the way her eyes glaze over when any interviewer brings up the CW drama is any indication. Though Reinhart does play Grace a little too seriously, she does inject the character with intense raw emotion that’s captivating to watch. Do you want to shake both Grace and Henry and yell, “Being a teenager doesn’t have to be all misery and could actually be fun?” Yes, you do. There’s no levity in this film and while the subject matter is rather dark, other films have been able to combine heavy subject matter with the joys of being young (i.e. The Perks of Being a Wallflower).

Like most teen-centered films, both Henry and Grace are overly smart and seem to know the art of Japanese pottery and obscure poetry. It’s not that those traits don’t exist in real teenagers but it seems like every teen in these movies has to have some weird hobby that indicates some secret about their psyche. To paraphrase comedian and director Bo Burnham, most teenagers are not poet laureates. Despite Abrams and Reinhart’s best acting efforts, Tanne’s script can’t seem to depict Henry or Grace with any realistic qualities, painting them more as idyllic beings with tragic backstories.

Like the subdued tones that seem to paint over the screen, Chemical Hearts probably won’t be remembered passed its released date. It’s a shame that this won’t be the jumping-off point that launches Abrams passed supporting roles or the vehicle that helps Reinhart shed her Riverdale persona, but it might be nice to look back on it and once their careers get on the trajectory they’ve been working so hard towards.

You can catch Chemical Hearts on Amazon Prime Video. Watch the trailer below.