Home News Disney ‘The One And Only Ivan’ Trailer: Bryan Cranston And His Gorilla Come...
Facebook
Twitter 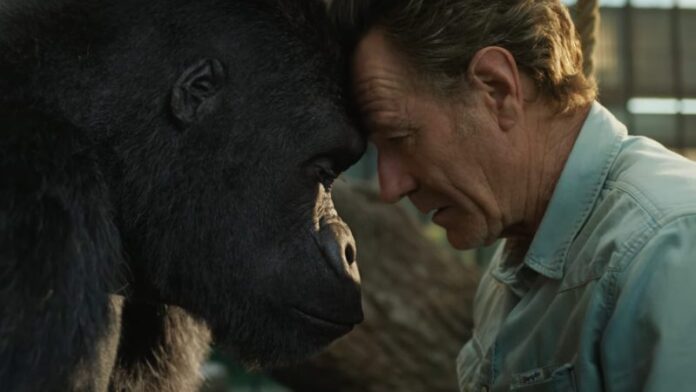 More so than most, Disney has been willing to pull its theatrical offerings for a prime Disney+ debut in the wake of the coronavirus outbreak. Even with theaters making noises about reopening, some films just seem to be better-suited to streaming service, and one of those is The One and Only Ivan, a family-friendly story about a man and his gorilla.

An adaptation of Katherine Applegate’s beloved children’s book, The One and Only Ivan stars Bryan Cranston and a menagerie of talking CGI animals. Sam Rockwell voices his 400-pound silverback gorilla pal Ivan, with Angelina Jolie as Stella the Elephant and Danny DeVito as the voice of Bob the dog.  The animals all live together in the Big Top Mall and Arcade, but have little recollection of how they got there.

Others in the cast include Helen Mirren, Brooklynn Prince, Ramon Rodriquez, Indira Varma, Phillipa Soo, Ron Funches, Ariana Greenblatt, and Chaka Khan. Thea Sharrock (Me Before You) directs from a script by Mike White (School of Rock), who also voices Frankie the seal.

The One and Only Ivan hits Disney+ on August 21st, and already looks a lot better than Dolittle.

SYNOPSIS: Ivan is a 400-pound silverback gorilla who shares a communal habitat in a suburban shopping mall with Stella the elephant and Bob the dog. He has few memories of the jungle where he was captured, but when a baby elephant named Ruby arrives, it touches something deep within him. Ruby is recently separated from her family in the wild, which causes him to question his life, where he comes from and where he ultimately wants to be.