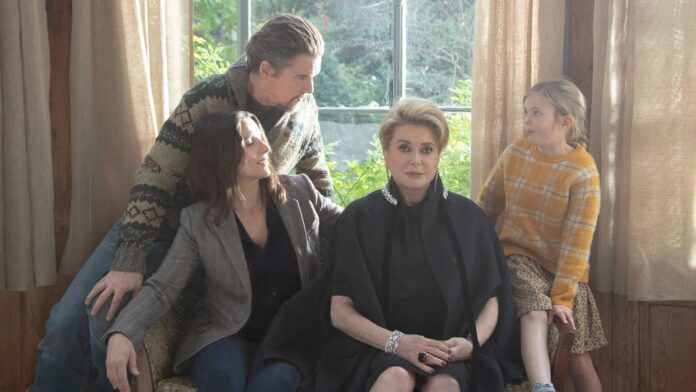 It’s long known to readers of this site that Hirokazu Koreeda is my favorite director working today. The Japanese filmmaker, whose incisive dramas such as Like Father Like Son, After the Storm, and recent Palme d’Or winner Shoplifters, tears into the bonds that hold families together like few others, telling stories that are universal despite the cultural specificity. So it was with some trepidation that I sat down to The Truth, one of those movies where an international director attempts to bring what has always worked in his native country, to one that is less familiar. In this case, Koreeda’s first English-language movie is set in Paris, France, with a mostly-French cast and crew. The result is somewhat mixed, but fans of Koreeda will find much that is familiar, and thus comforting.

The Truth is basically the flipside of the coin to Shoplifters, and as someone who doesn’t believe in coincidences, I believe this was the point. Moving away from the family of con-artists living on the streets of Japan, Koreeda instead focuses on the posh life of a star of French cinema and her family, who treat one another like complete strangers. The film stars larger-than-life French icon, Catherine Deneuve, playing fictional larger-than-life French icon Fabienne Dangeville. That’s not to say Deneuve is playing herself, but there’s not a lot of wiggle room from the sexy, outspoken, aging award-winning actress she depicts in Koreeda’s film. And much like Deneuve herself, Fabienne isn’t ashamed of a damn thing she’s done in her long acting career. She’s open about who she is and what she’s done (or who she’s done), and has no problem calling people out on their shit.

Except when it comes to her new memoir. There she’s more than happy to blur reality to paint the public picture she wants. The Truth is all about the release of Fabienne’s book, and the impact it has on her screenwriter daughter Lumir, played by another French icon, Juliette Binoche. Lumir arrives in Paris to celebrate the release of her mother’s memoir…if by “celebrate’ it means to rip her mom for creating a total work of fiction.  But as Fabienne sees it, she’s an actress and telling the truth has never been what she’s about. So why start now? The problem is that the people she’s also been selling a bill of goods to is her own family, and Lumir has had just about enough of it. She reads that her mother was a doting caregiver who picked her daughter up from school every day, and Lumir knows that’s a bunch of b.s.

So is Fabienne truly as selfish as she appears to be? Or has she been acting for so long that playing a role is all she knows how to do? Koreeda offers up some insights in the movie-within-a-movie, a rather lame sci-fi drama titled Memories of My Mother, which offers a meta-style examination of Fabienne and Lumir’s relationship. Fabienne plays the aging daughter of a beautiful but sickly woman who jetted off to space where time moves slower, and thus she has retained her good looks.  As Fabienne’s character desperately reaches for a connection to her mother, it’s a very melodramatic take on what Lumir finds herself going through. Koreeda often mixes things up and has some fun with it, as well, by having Lumir bring her wise young daughter (Clémentine Grenier) on set, and it just totally throws Fabienne for a loop.

So the bulk of the film is examining the tension between Fabienne and Lumir, but there is also the latter’s husband, Hank (played by Ethan Hawke), who has joined his family on the visit. Hank is a small-time TV actor on the verge of a possible breakout. He’s got his share of personal demons that he’s trying to keep at bay, and being around the indulgent Fabienne might not be the wisest course of action. As usual, Hawke is subtle and calculating in his performance, making the most of a character who is clearly not a focus and adding more dimensions to him.

The Truth feels different than Koreeda’s other films, though, and while I’m sure that is by design it isn’t nearly as satisfying. Perhaps trying to replicate the feel of French dramas, Koreeda opts for a laid-back calm that doesn’t always fit the strain of the situation. Koreeda’s best films tend to present a moral dilemma of which there are few if any perfect options, but The Truth is pretty straight-forward as far as toxic family dramas go. There’s something lacking in the depths Koreeda is willing to go and perhaps that is due to an abundance of caution in his first crossover movie. Other subplots emerge that attempt to add some symbolic weight to Lumir’s upbringing, such as learning that her mother played a villainous character in an adaptation of one of her favorite childhood stories. This and other diversions add less than the meta-narrative of Fabienne’s on-set theatrics.

The Truth still succeeds on the strength of its cast, in particular Deneuve in the showiest, juiciest role she’s had in ages, and Binoche as she tries to get to the heart of what is real. While Koreeda doesn’t get to the emotional center that has anchored so many of his previous films, The Truth confirms that, no matter the language, he has a unique understanding of how the roles we play in life can make a family work, break them apart, and put them back together again.