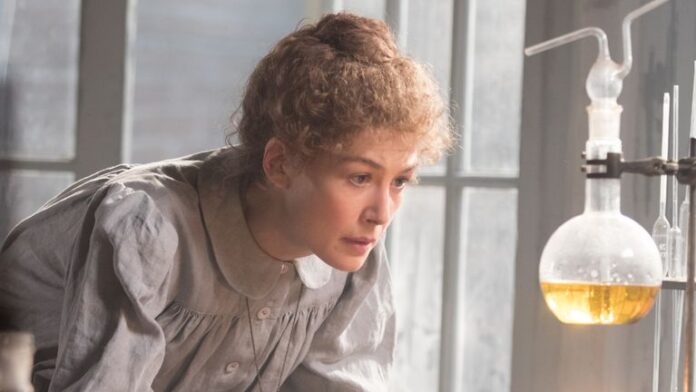 Innovation is often a double-edge sword. For the positive progress that lends value to a society, there can be negative unforeseen consequences. This was especially true for Marie Curie and her groundbreaking work in the field of radiation, which has cost as many lives as it has saved. Marjane Satrapi’s biopic Radioactive shows a Curie who grapples with the impact of her work, while always seeking the proper credit she’s due for it.

Rosamund Pike plays Curie, in the latest in a career’s worth of roles as strong, brilliant women navigating a field dominated by men. Admittedly, she’s terrific at it (see also her underrated performance in A Private War) and I’d be happy if she continues bringing light to stories such as these. Radioactive does start off a bit slow, and suggests the typical paint-by-numbers approach we’re accustomed to from historical biopics.  We’re introduced to Curie in the final moments of her life, flashing back to the people and moments that led her to this moment. Fortunately, this is not a traditional biopic by any means.

As much about sacrifice as it is discovery, Radioactive follows the ebbs and flows of Curie’s life, and how it intersects with the personal connections she makes with others. There are the typical biopic moments, beginning with her many fights over funding with her male colleagues. Curie was always fighting to get the respect she was due, and it wasn’t until she encountered her future husband, scientist Pierre Curie (Sam Riley, fantastic), that she started to receive it. Pierre was just as brilliant as she, but their courtship and eventual marriage was unusual for the time. He saw her as an equal, and fought to make sure she was treated as such. But their relationship was not without cost, on an emotional and physical level.

Satrapi, who has favored adapting graphic novels since her own Persepolis in 2007, captures the vivid colors and images of the page. The full radioactive spectrum ebbs and flows throughout this film’s visual palette, reflecting the benefits and curses brought about by their discoveries. Seamlessly woven into the narrative are practical applications of radiation across time; sometimes they are for the good, like reducing cancerous cells in a young patient; other times they are awful, like the use of radiation to create the atomic bomb and the devastating effect it would have for decades.

What Radioactive shows is a Curie who carried the burden of her great discovery through every moment of her life. When people start to get sick from radiation poisoning, the world at large turned on her. Other indiscretions helped poison Curie’s public image further, but she also carried around the knowledge that her work was also killing her physically, and was doing the same to the people she loved. Her decision to plow ahead, despite the risks, paints her as a more complex figure than virtually all depictions of Curie have ever dared to tackle.

That’s not to say Radioactive isn’t a bit rough around the edges. While Curie’s marriage to Pierre is beautifully rendered, with Pike and Riley showing chemistry I’d like to see again in the future, other aspects of her life don’t get enough treatment. In particular, we get very little of how her decisions have impacted her children. Anya Taylor-Joy doesn’t get nearly enough to do as Curie’s adult-aged daughter Irene, who often worked beside her mother and became a Nobel Prize winner, as well. During dry spells, Satrapi and screenwriter Jack Thorne fall back on genre tropes. Fortunately, these times are few and far between, driven by Pike who is captivating throughout.

Pike does something rare which is to show the sensitive and human side to Marie Curie, when scientists are so often depicted as indifferent to the world around them. It’s interesting, though, to wonder how her performance will be received. In a non-COVID year Pike’s performance would probably be overlooked. She is so consistently good that I think we take her for granted. But now, with so many movies on the shelf until next year, she emerges as a possible Oscar contender.

With Satrapi and Pike, Radioactive has the benefit of two women at the top of their game, and who are much like Marie Curie in that they demand your attention and your respect. They are the essential ingredients in an experiment that succeeds in crafting a compelling biopic about a person many of us already felt we knew from schoolbooks.