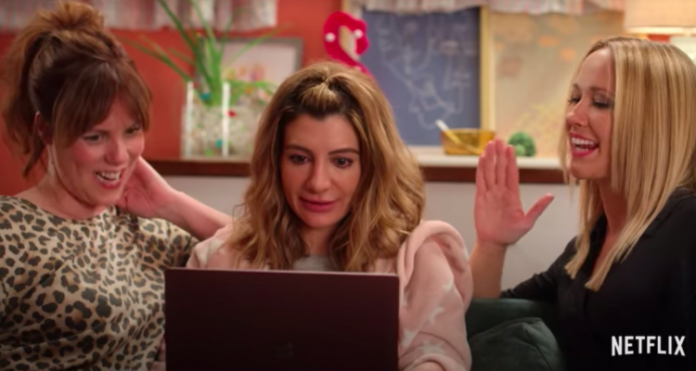 Netflix’s newest comedy Desperados takes an interesting look at dating in the modern world. To say that Wes (Nasim Pedrad) is in a rut couldn’t be more of an understatement. She’s on the wrong side of 30, jobless, single, and draining her savings account. Maybe most importantly, in her mind, her ovaries are quickly running out of time. Wes’s friends Brooke (Anna Camp) and Kaylie (Sarah Burns) are her rocks but are in different places in their lives. While both may be married, that doesn’t mean their lives are perfect. Yet that seems to take a backseat to everything that Wes is going through. After countless terrible dates, including an immediate veto by Sean (Lamorne Morris), Wes happens to meet Jared (Robbie Amell). Jared is the perfect guy – successful career, good looking, wants kids…so Wes has to screw it up somehow. 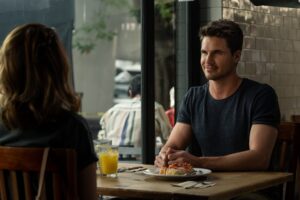 Jared goes MIA for a few days after they have sex. In a completely healthy and measured response, Wes decides to get drunk and leave Jared quite the scathing email. Brooke and Kaylie join in on the fun as they pass the laptop, and booze, around. Each one of them contributes to the profanity and emoji filled email and off it goes to Jared’s inbox. In a cruel twist of fate, Jared immediately calls Wes to let her know he was in a car accident in Mexico and stuck in the hospital. In short, Wes realizes she has a brief window to get to Mexico, delete the email, and save her relationship. She talks Brooke and Kaylie into joining her and the three of them go off on a Mexican adventure. 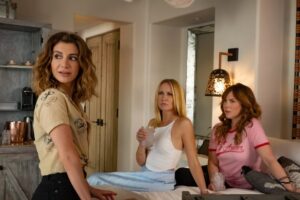 Desperados doesn’t reinvent the wheel. Hell, the plot is eerily reminiscent of Road Trip – friends race against time to save a relationship by intercepting _________. However, that doesn’t mean it isn’t full of laughs and ridiculous moments. I found myself cracking up throughout and for a comedy, there isn’t too much more you can ask for. Writer Ellen Rapoport and director LP keep things fresh and interesting with a fast-paced script and fun stylistic choices. Some have been used before – most notably texts/voicemails appearing on screen – but they find a way to add unique elements. On top of that, you throw in a cameo or two and Desperados really rounds into form. 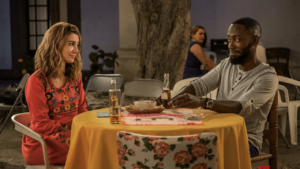 Desperado pushes the envelope at times. There are plenty of hilarious moments and on the other hand some that are just plain absurd and slightly stupid. Above all, the good far outweighs the bad. The chemistry of the three leading ladies is strong and they each bring their own quirks to the group. It is also great seeing the two New Girl alums back on screen together. If you think one awkward date is it, think again. Sean is in Mexico for one reason or another and helps Wes with some of her hijinks. A long weekend is the perfect time to put the kids to bed and take a Netflix trip to Mexico. Get the popcorn ready, turn on Desperados, and be prepared to laugh and shake your head…but mostly laugh.

Sundance Review: ‘How It Ends’