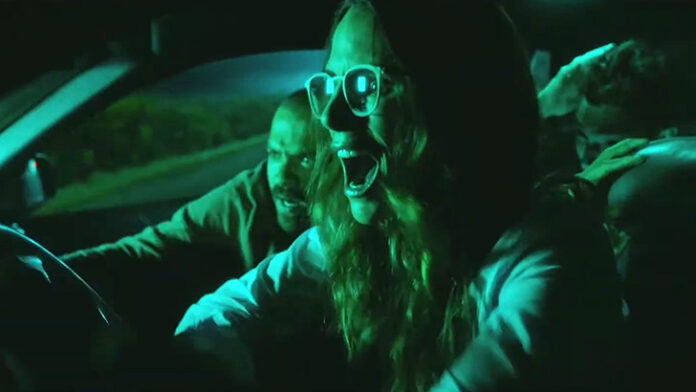 Most recognize Jay Baruchel for his comic roles in Knocked Up, She’s Out of My League, Man Seeking Woman, and as the voice of Hiccup in How to Train Your Dragon. But in recent years he’s made almost a full transition to a filmmaker, writing the hockey comedy Goon then making his directorial debut with its sequel, Goon 2: Last of the Enforcers. Now Baruchel is back with his latest directorial effort, Random Acts of Violence, a slasher that debuted last year at Fantastic Fest.

As in most of Baruchel’s films, he also takes a co-starring role, joined by Jesse Williams, Jordana Brewster, and Niamh Wilson. The story follows a comic book creator and his publisher who made their names with a comic based on real-life serial killer Slasherman. While on a road trip to New York Comic-Con they visit the town where the murders occurred, only to find that a series of eerily familiar murders are being committed. How long before the creators themselves become the targets?

Baruchel wrote the script with his Goon co-writer Jesse Chabot. The film was right at home with the genre crowd of Fantastic Fest, and the strong reviews coming out of it reflect that. Random Acts of Violence should also be right at home on Shudder, which will debut the film on August 20th.

SYNOPSIS: What are the real consequences when life begins to imitate art? Comic book creator Todd Walkley (Jesse Williams), his wife Kathy (Jordana Brewster), assistant Aurora (Niamh Wilson) and best friend, Hard Calibre Comics owner Ezra (Baruchel), embark upon a road trip from Toronto to New York Comic Con and bad things start to happen. People start getting killed. It soon becomes clear that a crazed fan is using Todd’s “SLASHERMAN” comic as inspiration for the killings and as the bodies pile up, and Todd’s friends and family become victims themselves, Todd will be forced to take artistic responsibility.