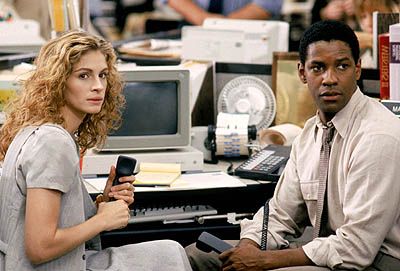 Even before they first starred together in The Pelican Brief, Julia Roberts and Denzel Washington’s careers have been on a parallel track. They both rose up around the same time in the 1980s, and were only separated by a couple of years in their first Oscar nominations; him for Glory in 1987, and her for Steel Magnolias in 1989. By the time they crossed paths for The Pelican Brief in 1993, they were two of the top actors on the planet. It’s only taken nearly 30 years for them to be reunited, but Netflix has managed to make it happen.

THR reports that Netflix has won a hot bidding war for Leave the World Behind, which will reunite Julia Roberts and Denzel Washington. It will also see Roberts working once more with writer/director Sam Esmail, who she worked with on Amazon’s Homecoming series. Esmail is also the creator of Mr. Robot.

Leave the World Behind is based on the upcoming novel by Rumaan Alam and “follows a husband and wife as they head out to a remote corner of Long Island expecting a vacation with their teenage son and daughter. When the owners of the rental return in a panic one night after they say a sudden blackout has swept through the city, the couple aren’t sure what to believe. With the TV and internet down and no cell service, the two families are forced into a tense living situation.” Issues of race, class, and parenting will be tackled.

No word on when this will start. Email and Roberts are already working together on another series, titled Gaslit, and she has another Amazon series Charlotte Walsh Likes to Win. Upcoming for Washington are John Lee Hancock drama The Little Things, followed by a new Macbeth film from Joel Coen.