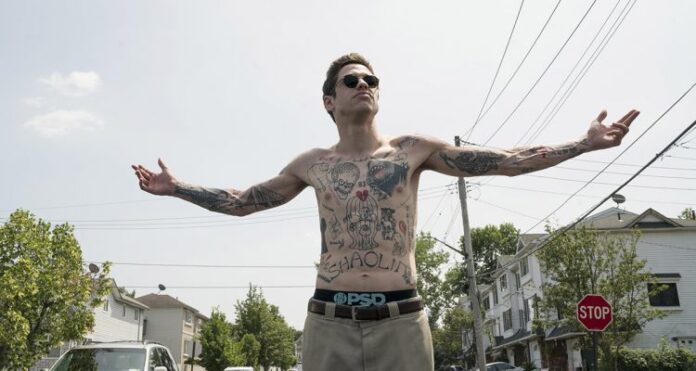 In The King of Staten Island, Pete Davidson plays an irresponsible manchild with few prospects, fewer social graces, and yet everybody seems to love him. It doesn’t sound like too much of a stretch for Davidson, who has made a career on playing exactly that type of overgrown kid whether on SNL or in his recent film Big Time Adolescence. And it’s not too far out of the comfort zone for director Judd Apatow; arrested development has been his thing since Knocked Up and The 40-Year-Old Virgin. Hopefully, familiarity won’t breed contempt as this is not only a breakthrough performance by Davidson, but the most mature film Apatow has delivered in years.

Co-written by Apatow and Davidson, the lead character of Scott has a lot in common with the standup comedian. But it’s important to note that it isn’t autobiographical. Scott is a Staten Island kid whose father was a fireman who died years prior. That much mirrors Davidson’s own experiences; his father died on 9/11 and it threw his life for a loop until he recovered with the help of stand-up comedy. But Scott isn’t a comedian, although he has a tendency to drive everyone around him crazy. Most of all his mother (Marisa Tomei), a nurse, and little sister (Maude Apatow) who spend most of their time worrying about Scott as he stumbles from one misbegotten scheme to the next. On the journey to being a responsible, self-sufficient adult, Scott hasn’t bothered to get off the couch.

Scott’s loser routine can be aggravating, and he does some really shitty things like tattooing a minor without his parent’s consent. It’s all part of his disastrous plan to someday open up a tattoo parlor/restaurant, potential health code violations be damned. But the incident connects Scott’s mom with Ray, a divorced firefighter with a no-nonsense attitude. Scott hates him, of course, and breaking them up is the first thing he can seem to focus on in a long time.

The King of Staten Island is no mere stoner comedy, though, nor are the battles between Scott and Ray echoes of Meet the Parents or Anger Management. The jokes are more insightful, reflective of a young man whose entire world view has been altered through tragedy, but also from living in Staten Island, a place he describes as having a “garbage dump you can see from space.” It’s the richest version of the slacker archetype that Apatow has produced, and Davidson plays it better than anyone could have predicted.  Scott’s issues go beyond a mere refusal to grow up, they are rooted in tragedy, regret, and other factors that play out in ways we can all recognize and believe.

Davidson is surrounded by a terrific cast all-around. Tomei is wonderful as Scott’s mother Margie, who has been sucked down into her son’s madness for too long. Bel Powley nearly steals the movie as Scott’s on-again/off-again girlfriend Kelsey, who is trying to better herself in ways she wishes he would. And then there’s comedian Bill Burr, who as Ray shows, in some ways, what Scott could be if he ever got his life together. While this is undeniably Davidson’s movie, I won’t be surprised if Burr gets just as busy with offers after this.

All of the positives aside, it takes some time for the movie to get going and that’s only when Scott finds himself with a true foil. At 136-minutes there’s a lot that could be cut away, including some flat, unfunny sequences with Scott’s equally-lazy friends that do nothing to help you want to cheer him on.  Perhaps the runtime won’t hurt The King of Staten Island in the long run. Davidson is a divisive figure but he’s one that many seem to be obsessed with. Like him or not, people want to see him succeed or fail, and they’re going to check this film out to see if he sinks or swims. Hopefully, they’ll be willing to give him a fair shot. Truth be told, I’m not a Davidson fan and probably never will be, but The King of Staten Island will have me taking him more seriously from here on out. It does much the same thing for Davidson’s career that Punch-Drunk Love did for Adam Sandler, and I think that’s pretty high praise.